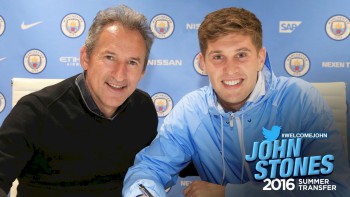 Manchester City have confirmed they have completed the signing of Manchester United defender target John Stones on August 9, Tuesday.

The 22-year-old left Everton and made a switch to the Etihad, signing a six-year deal with Pep Guardiola’s side. Before he joined City, he was also a target for their local rivals as the Sun reported that the England international was wanted by the Red Devils manager Jose Mourinho, who is an admirer of the central defender.

United manager is looking to further strengthen his side’s back four for the 2016-17 Premier League season, having already added Eric Bailly to the squad.

A statement on City’s official website read, ” Manchester City are delighted to announce the permanent transfer of John Stones from Everton. The England international defender has signed a six-year deal which will keep him at the Etihad Stadium until at least 2022.”

Stones will wear No 24 shirt at City and he explains why he decided to join the former Barcelona manager at the Etihad. He also went on to thank Everton and wished them lick for the upcoming campaign.

“I’m absolutely delighted to sign for City and now the deal’s done I’m looking forward to the next stage in my career,” Stones told City’s official website.

“I’ve obviously seen what’s going on here at the Etihad, it’s an ambitious Club with a great manager so I can’t wait to get stuck in and help achieve the goals.

“I know it will be tough getting a place in this team but I’m determined to become the best player I can be and help us to success. I had a wonderful time with Everton and wish them and their fans all the best but now I’ll give my all for City.”