No Ronaldo? No Problem For United! 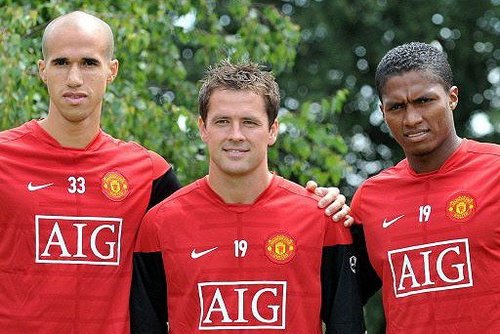 There is no doubting the immeasurable void that’s been left in the United side following the departure of one Cristiano Ronaldo. When you remove a player capable of scoring 42 goals in a single season, there’s bound to be a gaping hole left behind. While Sir Alex clearly had no choice but to allow the Portuguese the chance to fulfil his dream of playing for Real Madrid, our trusty Scottish manager has undoubtedly had a major say on who potentially joins/has already joined the club this summer.

Antonio Valencia, Gabriel Obertan and Michael Owen – the three newest members of the Manchester United squad. OK so the aforementioned signings certainly haven’t got pulses racing amongst many of us but shrewd they are nonetheless at a combined total of around £20 million. The underlying fact is that no one in the world can replicate the unprecedented talents of our former number 7 and that’s been represented in our transfer dealings. Ronaldo simply can’t and won’t be replaced, but my question is…are we really that worried?

I am firmly of the belief that some of the transfer fees being bandied about during the current transfer window are utterly ridiculous. OK so we are hardly innocent with the £80 million received for Ronaldo but I guess that’s the price you have to pay for the world’s absolute best. I ask would we really be comfortable with the purchase of Franck Ribery for a similarly extravagant price? I certainly wouldn’t. Especially not when we may just have all the ingredients for a successful campaign already in place, right under our very noses.

The stage is set for another Portuguese international to step up to the plate this season. The sale of Ronaldo could just prove to be a god send for Nani and this is his big chance to grab the limelight and prove his fantastic credentials. I wrote an article not too long ago suggesting that perhaps it could be time up for the former Sporting Lisbon man at Old Trafford. Well scrap that, as starting from August 16th, this is Nani’s new beginning.

Antonio Valencia has already shown glimpses on his debut against Boca Juniors yesterday that he could be a very useful addition indeed. Zoran Tosic looks neat and tidy and with a terrific left foot and we know all about the tenacity and work rate of Park and what that brings. While little is known about Gabriel Obertan, Fergie wouldn’t have brought him in if he wasn’t convinced that the Frenchman was capable of developing at the club.

When you put it like that, life after Ronaldo may turn out to be very rosy indeed. Wayne Rooney has already indicated that he’s ready to take on the burden and deliver the goals this season and Sir Alex has appreciated that Dimitar Berbatov could be a much more potent threat if he’s played as the more advanced striker. With the predatory instincts of Michael Owen and the youthful exuberance of Federico Macheda and Danny Welbeck, I believe we have enough attacking options without needing to unnecessarily splash the cash.

One of the key components that contributed towards our success last season was the consistency of our back four. Well to my knowledge, nothing has changed in that department and I suppose an added bonus that comes with the sale of Ronaldo is an extra willing worker vacating his place in the midfield. I must also point out that in Ferdinand and Vidic, I am in no doubt that we possess the strongest defensive partnership in European football (with arguably the most promising centre-half in Jonny Evans too).

Although let’s pause and take a breath for a minute. I can’t deny that there is a very small but niggling thought lodged firmly in the back of my mind chipping away at me with every day that passes in the build-up to the new season. I’m hopeful that it will be put to bed by the time we reach Christmas but, dare I say it, what if we head in a similar direction as Arsenal and life after Thierry Henry. The Barcelona star was a similarly massive influence to the Gunners as Ronaldo has been to our cause over the last few years but let’s try not to dwell on that as I’m confident we have the strength in depth to not only cope, but to flourish without the world’s best player among our ranks.