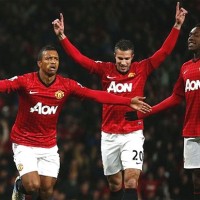 When, a couple of days ago, Sir Alex Ferguson described the current United crop as better and stronger than the 1999 vintage that delivered an unprecedented Treble, many eyebrows were raised. Are Danny Welbeck and Michael Carrick really a better proposition than Dwight Yorke and Roy Keane? The jury will be out for another couple of months, but tonight’s win against Reading keeps United on course to reach Wembley twice in May.

That the result was achieved with a starting line-up including only three players that had started in Madrid and that the man of the match, Nani, was introduced in the closing stages of the first half really does speak volume for the depth at Fergie’s disposal.

Following last week defensive heroics in Madrid, David De Gea retained his spot between the posts, with Nemanja Vidic and Chris Smalling replacing Rio Ferdinand and Jonny Evans, while Phil Jones shifted at right-back with Alex Buttner on the other flank.

The gulf in glamour and expectations between last Wednesday’s tie and a Monday night FA Cup fixture – further proof, if any was needed, that fans’ voices have been completely drawn out  by business and TV revenues – but United started where they had left off in Madrid.

With barely 60 seconds on the clock, first Javier Hernandez and then Danny Welbeck saw their shots blocked before Antonio Valencia failed to apply any power or direction to his header. Two minutes later, Ashley Young’s pass cut Reading’s defence wide open but Welbeck was denied by Federici at the near post.

The Australian keeper would be called into action again midway through the first half as he saved Tom Cleverley and Ashley Young’s shots in quick succession, albeit the former Villa man should have buried his chance but, having been played onside by a distracted Reading’s back four, failed to convert the tap-in. 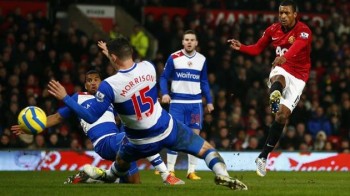 Between those chances, Reading – whose brilliant, workmanlike effort explained why only behind Spurs and United have accumulated more points in the last eight league games – had managed to control the game with relative ease, but failed to produce any clear cut chances, bar the odd menacing set piece, until United fan Adam Le Fondre forced De Gea into a save that would have undoubtedly pleased the photographers.

A minute later Nani, who had replaced the injured Phil Jones, struck a venomous volley that crashed against the post, before testing Federici with a fierce effort that was brilliantly parried over the bar by the Reading custodian.

United started the second half with the foot firmly on the pedal, while Reading’s physical effort started to take its toll, allowing Cleverley and Anderson to run into spaces that were suddenly opening ahead of them, after a first half in which they had struggled to generate any momentum.

Federici denied Anderson with 15 minutes gone in the second half, before Nani saw two efforts going just wide of either post. Robin Van Persie’s introduction after 65 minutes was greeted with a rousing reception by the crowd, as the game increasingly resembled a rugby encounter, with United producing phase after phase of attack pinning Reading in their own penalty box.

Two goals in quick succession seemed to have sealed the tie for United, who had won their last 5 FA Cup ties at Old Trafford, conceding just one goal in the process, but some poor defending allowed Jobi McAnuff to pull one back for the visitors with less than ten minutes to go.

There wasn’t gonna be another late heroics for the Royals, though, as Fergie’s men keep marching onto Wembley.