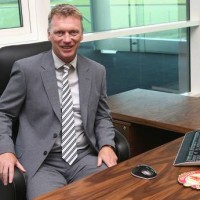 David Moyes yesterday completed his first day in charge of Manchester United, seven weeks after being appointed as Sir Alex Ferguson’s successor, and has already begun to shape the club to his image by introducing new members of the coaching staff.

Steve Round will be Moyes’ assistant manager with  Jimmy Lumsden operating in a coaching role, while former Sheffield Wednesday goalkeeper Chris Woods takes on the goalkeeping coach’s duties.

“I have worked with Steve, Chris and Jimmy for a number of years and I am delighted they have decided to join me at this great club,” Moyes told the Guardian. “They bring great qualities in their respective fields and I know that, like me, they feel that this is a challenge to relish. I have great faith that together, we can build upon the success this club has enjoyed over many years.”

With his coaching staff in place Moyes’ attention now turns to the transfer window as the former Everton manager looks to bolster his squad ahead of next season. The first man on Moyes’ list is Everton full-back Leighton Baines for whom United are set to offer £16m, according to the Daily Star, after having a first £12m offer turned down last week.

Potential arrivals aren’t the only thing on Moyes’ agenda, though, as the former Everton manager must sit down to deal with United’s very own elephant in the room as the United manager looks to resolve the saga revolving around Wayne Rooney.

Tabloids are divided on the United striker’s future, with the Mirror claiming that David Moyes has made retaining the striker his number one priority and will make that clear to Rooney when the two meet this week, but United have already rebuffed an offer from Arsenal.

According to the Mirror: “Moyes determination not to sell to a direct rival leaves Paris Saint-Germain as Rooney’s only realistic destination overseas, but it is believed he is not enthusiastic about uprooting his young family and moving to France.

“New manager Moyes is prepared to give Rooney the assurances he wants – that he will not be hauled off or overlooked for the big games like he was last season under Ferguson.”

Not surprisingly, the Daily Mail sees things in a complete different way, claiming that: “[Moyes] is increasingly resigned to the fact that Wayne Rooney’s Old Trafford career is coming to an end.”

The Mail goes on to claim that Rooney and Moyes have apparently already met and, therefore, had the meeting been successful there wouldn’t be any need for the two parties to meet again. Even for Mail’s standards this suggestion is as far fetched as they get, but that doesn’t stop the tabloid from describing Arsenal and Chelsea to be on “red alert” and ready to square up one another to sign the England international.

The Telegraph, meanwhile, claims Chelsea are ready to offer £20m for the striker who “will not wish to surrender bonuses with a formal transfer request”, while the Independent believes Rooney’s chance of staying are around 40%.

Finally, for those desperate for the latest developments on Thiago Alcantara, the Daily Star believes the transfer is done and dusted. And what, we hear you wonder, might the extremely solid base, upon which the tabloid has based such claim be? The fact that Thiago has signed a United shirt, only for the fans to post the obligatory video on YouTube.

We’ll leave that one with you.