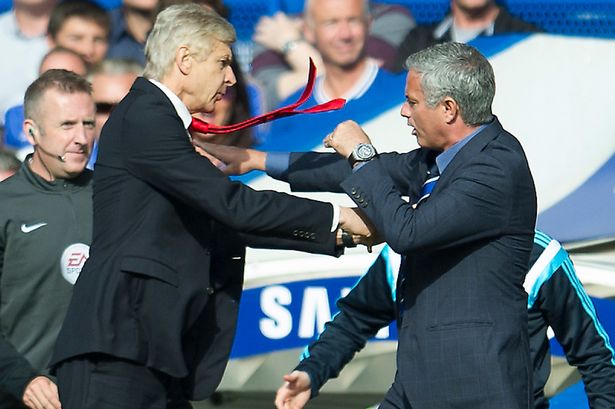 Manchester United boss Jose Mourinho has hit out at Liverpool and Arsenal managers Jurgen Klopp and Arsene Wenger yet again.

The Mourinho-Wenger rivalry, the push-gate affair and most certainly their continuous swipes at each other, certainly make the duel between the managers more crispy. As United have completed a world record €105 million transfer of midfielder Paul Pogba from Juventus, Mourinho taken a jibe at Klopp and Wenger. As reported by Goal, the Arsenal boss branded the eye-popping Pogba transfer as ”completely crazy”.

In an interview with the Liverpool Echo, Klopp remarked on Pogba’s transfer:”If you bring one player in for £100m and he gets injured, then it all goes through the chimney. The day that this is football, I’m not in a job anymore, because the game is about playing together.”

Mourinho has taken jibes on the rival manager duo now and suggested both Arsenal and Liverpool are not capabe of smashing the world-record fee.

“I know the discussion, I understand that, sometimes in football, things happen and the club breaks the record, but this is only possible at clubs like Man United,” Mourinho remarked in an interview with MUTV, as reported by Goal.

According to the Liverpool Echo, the Red Devils’ boss had some particular words for Klopp. On the ”Normal One”, the ”Special One” told reporters:”You are right, he (Klopp) was one of them (who had spoken) but I don’t comment.”

”He made comments about us but I don’t comment about him. Or about his club.”

”I heard already two of my colleagues from other clubs speaking about us. I do not like that. It is not ethical. There are things that when I do (them) are not ethical, and when others do it everything is normal.”

”All that matters is what happens in my house, not in my neighbours’ house”- concluded Mourinho.

Taking swipe at Klopp and Wenger and implying Arsenal and Liverpool are not big enough to get a world class player like Pogba, is typical Mourinho. Love him or hate him, you can not ignore his gift of the gab.

Probably it was a timely dig at Wenger for the backlash he is getting for not being active in the transfer market. But hours after  Wenger’s  “We have Mourinho, Conte, Guardiola and Klopp. It’s a world championship of managers” comment, where he puts Mourinho in good light, how “ethical” was it of Mourinho to take jibe at Wenger, one may question.