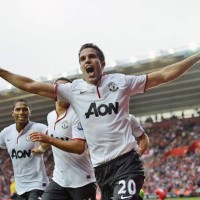 Make no mistake, tomorrow night should not be taken for granted for a minute, although many will. Think Wigan away last season, think Everton at home. These are games we (and I’m sure the team) will find themselves constantly reminding each other of as the season draws to what will hopefully be a title winning close.

Tonight United welcome Southampton to Old Trafford knowing a win could extend their advantage back to seven points after local and title rivals City slipped to a meagre 0-0 draw at Loftus Road last night.

Despite United’s history of excellent looking results against Southampton (unbeaten in their last 17 league matches at OT) since 1988, Southampton have been known to spring the odd surprise on United and rarely give them an easy game. In fact, Southampton have failed to score at OT just five times in those 17 matches Betegy accordingly make United 52% favourites to take all three points with a both teams scoring.

Take the reverse fixture of this way back in the first week of September 2012 when it took an extraordinary hat-trick from the then ‘new man’, Robin van Persie to secure a win for United who conceded the first goal of the game (and fell behind twice) at St Mary’s for the third game on the spin (all three opening fixtures), it was an early season trend that needed to be bucked but it took until Christmas, and the not-so-coincidental return of Nemanja Vidic, to rectify it. United have taken the lead in their six most recent league and cup games.

Southampton arrive at United in decent form having not been beaten in their last six fixtures. Admittedly five of those results were draws but when you consider Stoke away, Arsenal at home, Chelsea away (2 down at HT) and also a visit from Everton; that’s no mean feat for sure.

Despite the positive results and current encouraging league position [15th] AND the teams fightback from two goals down two days earlier at Stamford Bridge, Southampton bizarrely opted to sack Nigel Adkins in favour of little known Argentinian, Mauricio Pochettino a little over a week ago.

After viewing his first match in charge (at home to Everton) it’s difficult to see Pochettino changing too much or attempting to shut up shop. With players like Ramirez, Schneiderlin and Lambert he has players at his disposal who can hurt United as they proved at St Mary’s.

United have no fresh injury worries after their win against Fulham in the cup on Saturday. The performance from Anderson must surely give him a good chance of starting his first Premier League game for a while. Rooney and Hernandez looked sharp in RvP’s absence so the gaffer could keep his strikeforce unchanged for this with RvP waiting in the wings if necessary.

As per usual, predicting United’s line-up is tricky, but with City dropping points last night, an almost fit and healthy squad beginning to hit top gear, I have to imagine Sir Alex will play a strong team but will spring one or two surprises with one eye on an even trickier away trip to Fulham on Saturday. 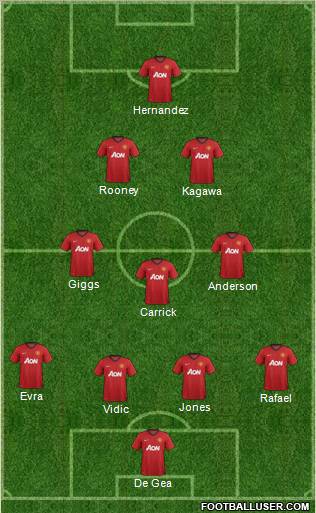 For this fixture Betegy are going with a 3-1 home win but their stats will heavily take into account our early to mid-season form and result whilst almost ignoring our return to form and purpose as a defensive unit. It’s for that reason I’m predicting a more satisfactory 2-0 victory with a confident, composed and well deserved cleansheet for our merits.

What’s your prediction? What team do you think Sir Alex will go for, what formation?

Will Southampton pose a goal threat or are they likely to park the bus and hope for the best?

Berbatov returns as United continue the campaign for 12th FA Cup triumph
Can United extend the gap at the top to 10 points?