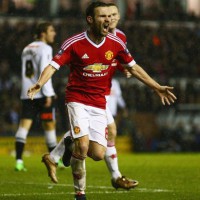 Juan Mata has set his sights to a winning run this month as Manchester United look to put a rather dismal January behind them.

Despite picking up wins against Swansea and Liverpool in the Premier League and beating Sheffield United and Derby County in the FA Cup, United have come under intense scrutiny last month, with Louis Van Gaal’s future at the club increasingly under a cloud.

Writing on his blog, One Hour Behind, Mata said United had to build on Friday’s night win away at Derby and get their league campaign back on track.

“It hasn’t been an easy month but our victory in Derby leaves a good taste because it means a boost of energy for us: we move onto the next round of the FA Cup and also the team had good feelings and I think we played a good match,” he said.

“It was a very positive win with a more dynamic, fluid style that we hope to maintain from now on.”

“There is no time to enjoy the win in the FA Cup because we are already focused on our game against Stoke tomorrow.

“This is a very busy month with seven games and our aim is to try to win them all, starting with Stoke, who beat us in the first half of the season.”

United suffered an embarrassing 2-0 defeat at Stoke on Boxing Day and Mata has warned his team needed to be well aware of the danger posed by Mark Hughes’ side.

“They have a team with many talented players who have changed the way they play football with regard to the last few seasons and it’s working well for them,” he added.

“We are looking forward to a new win in Old Trafford and, from now until the end of the season, we have to be strong at home and don’t concede any points.”