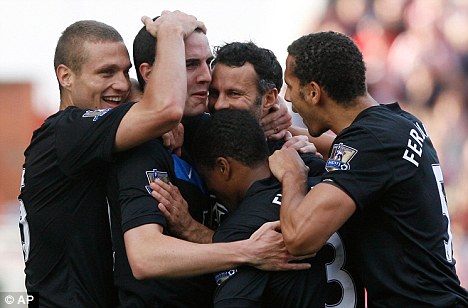 Matchday Two of the Champions League is fast approaching and one thing for sure is that VfL Wolfsburg should provide something of a tougher test than United’s previous opponents in the competition. Yes while Besiktas were plucky and persistent, the German champions are a far more accomplished outfit and you’ve probably heard that they’re not too bad up front either.

That’s because in Brazilian striker Grafite and Bosnian international Edin Dzeko, Wolfsburg possess one of the deadliest strike partnerships in Europe. The duo managed a record 54 goals between them in the Bundesliga last season and throw in Obafemi Martins, a player who certainly knows a thing or two about scoring at Old Trafford, and you’re faced with a pretty potent attacking trio.

It’s fair to say that United have a few attacking options themselves and Saturday’s win over Stoke City in the Premier League was utterly satisfying, considering the nature in which the lads dominated from start to finish in a game one would have expected to have been decidedly even. That result stretches the 100 per cent record to seven games now and Wolfsburg at home will present the chance to keep that run ticking over.

The team shouldn’t change drastically from the trip to the Britannia Stadium with, bar a late injury set-back, the back five of Foster, Evra, O’Shea, Ferdinand and Vidic remaining unchanged.

As we have come to expect with a Ferguson midfield there will undoubtedly be a slight adjustment and Nani is arguably the most likely to drop out for the ever impressive Ryan Giggs. That could also see Paul Scholes given a rest as a result with Michael Carrick and Anderson fully charged and raring to go in hope of lining up alongside Darren Fletcher.

It is my view that Fletcher will have to start if United are to nullify the threat of Zvjezdan Misimovic, a midfield playmaker who grabbed an eye-catching 18 assists in the German league last term. Not to mention that the combative midfielder is the best thing to have come out of Scotland since Braveheart and Sir Alex.

While Ferguson has often reverted to a 4-5-1 formation when away from home in the Champions League, Old Trafford is a different kettle of fish and thus you would think that the Scot will opt for a Rooney-Berbatov partnership up top.

In the build-up to the game Sir Alex has insisted that he will not underestimate the attacking prowess of the Wolfsburg side.

“The two strikers [Dzeko and Grafite] scored an incredible tally of goals last season. 71 in a season is incredible for two strikers,” the United boss is quoted as saying by the Telegraph.

“In terms of Dzeko, he was a player we saw and I was very impressed by him. Wolfsburg are a team that scores a lot of goals, but they also lose a few.

Ferguson went on to maintain that reaching the 10 point mark is the aim for the group stages of Europe’s pinnacle club competition.

“In a group of four teams, you just want to get to 10 points as quickly as possible,” he added.

“The quicker you do it, the better it is for obvious reasons. But we have only played once so far and we have to maintain our consistency and concentration in these matches.”

Former Newcastle striker Martins spoke to BBC Sport about the threat of United even without Ronaldo and Tevez and that the team are capable of providing the goals from all over the pitch.

“Even without Ronaldo and Tevez, I would say you face the same problems playing against United. In fact, I would even say they are playing much better than before,” the Nigerian international said

“When Ronaldo was on the pitch, everyone looked to him, expecting him to change the game when his team most needed it.

“But now United have a lot of players who can change a game, like Wayne Rooney, Michael Owen, Dimitar Berbatov. Even the defenders can score goals, so we must watch out for them all over the pitch.”

Statistically things don’t read too well when you consider United’s record against German opposition in the Champions League. Out of a total of fifteen games, the Reds have only picked up four victories with six draws and five losses.

The United back four will certainly have to be on their toes throughout what is sure to be a tense but thoroughly entertaining encounter with the form of Grafite and Dzeko a particular concern. The latter notched his sixth of the campaign against Hannover on Saturday while former Le Mans attacker Grafite scored a Rooney-esque hat-trick on his Champions League debut a couple of weeks back.

With all that said, we are at home at the Theatre of Dreams and certainly have no reason to fear even the greatest teams in world football. While Wolfsburg may not be in that category just yet, they are a wonderfully gifted attacking outfit all the same but United possess just as much fire power and a solid defence to boot.

I would be a tad more apprehensive if we were playing at Wolfburg’s Volkswagen Arena but home advantage should see us through home and dry with Wayne Rooney ultimately proving too hot to handle for Die Wölfe.