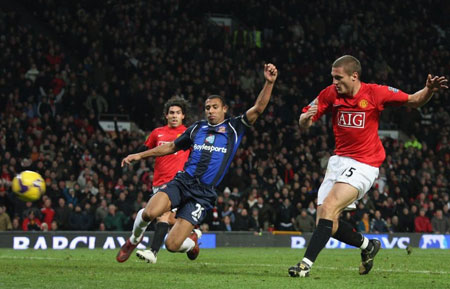 A former United stalwart returns to Old Trafford this weekend (along with a few other familiar faces), bringing along with him a Sunderland team that have endured something of a yoyo start to the season. Yes Steve Bruce skippered the Reds to three Premier League titles once upon a time but he will be desperately hoping to outwit his former mentor in the opposing dugout come Saturday.

To get the ball rolling, the Black Cats haven’t won at the Theatre of Dreams in some 41 years. With eight wins on the bounce for the Reds heading into the game, anything but victory would surely be deemed a disappointing result.

Following the hard fought triumph over an aesthetically pleasing Wolfsburg on Wednesday, three points at home in the Premier League is certainly a must in order to keep things ticking over. Sunderland, on the other hand, were 5-2 winners against Wolves in their last outing, a deceptively flattering scoreline as I’m sure those who witnessed the encounter will testify.

The main bits of team news from a United perspective refers to opposite ends of the pitch. After putting in a steady shift without covering himself in glory against the German champions, Tomasz Kuszczak will have to settle for a place on the bench as Ben Foster resumes as Edwin van der Sar’s Premier League deputy. Michael Owen’s latest injury, meanwhile, will keep him out of action for the forthcoming round of international fixtures next weekend.

At the back you would envisage little change with Ferdinand and Vidic at centre-back and Patrice Evra and John O’Shea on either side of them.

Ryan Giggs’ cameo on Wednesday evening brought about his 150th career goal for United and the landmarks are coming around thick and fast as a strike against Sunderland will see him notch up his 100th Premier League goal. Your guess is as good as mine as to who Fergie may decide to play on Saturday (you’ve probably a better chance of predicting the lottery results in fairness) but given the current rotation policy and that we should be afforded plenty of space, expect Scholes and Fletcher to possibly start with Nani and Valencia on the flanks as Park remains doubtful with a virus.

That leaves Rooney and Berbatov to head up the attack, a partnership that is showing signs of flourishing and should come to life against the frailties of a Sunderland defence that is hardly up there with the best in the league.

The big decision Steve Bruce will have to make is whether to sit back and soak up pressure or attack United from the off and hope for the best. Whatever tact the one-time United captain decides to go with, Darren Bent will undoubtedly start having scored eight in his last nine Premier League starts.

Speaking to the media, Ferguson explained that he is hardly relishing the task of picking his team with so many players fighting fit and on top of their games at the moment.

“We’ve a strong squad. The problem with having everyone fit is picking the right team,” he is quoted as saying by the Associated Press.

“Our two central midfielders – Michael Carrick and Anderson – were fantastic against Wolfsburg, and I thought Darren Fletcher and Paul Scholes were outstanding at Stoke. It is giving me a real headache.”

The United boss went on to praise the managerial work of his former player and that he expects Sunderland to achieve big things with Bruce at the helm.

“He’s had experience of the other side, from down there scrapping at Sheffield United, Crystal Palace, Huddersfield, Birmingham, and the job he did at Wigan in his second spell there last time was fantastic, almost getting them into a European place,” Ferguson added.

“Now he’s had the chance to spend some money and he’s looking good. Steve’s galvanised the club already, and you can see something great happening there. Hopefully not against us on Saturday.”

On the other side of the fence, Bruce paid tribute to Ryan Giggs, a player he labels one of the greatest to have graced the Premier League.

“He started in 1993 and where are we now, 2009? Jesus. And to play at the level he has been doing, he has to be the greatest ever player to have played in the Premier League” he is quoted as saying by the Telegraph.

“Not just because of his longevity but because he is playing for Manchester United and still getting man of the match awards.

“For me he is their best player, at his age as well.”

Saturday’s match will be the 13th time that Bruce has gone head-to-head with Sir Alex with the Scot possessing a record of ten wins and two draws to date. The former Birmingham City manager may fancy his chances more than ever before considering the form of Darren Bent but the likes of Vidic and Ferdinand haven’t been in opposition before now.

Anything but a comprehensive result will clearly be frowned upon and bar an absolutely unbelievable Sunderland performance a woefully poor United showing, a comfortable victory should prove the final outcome and put further pressure on Chelsea needing to gain a positive result against Liverpool the day after.