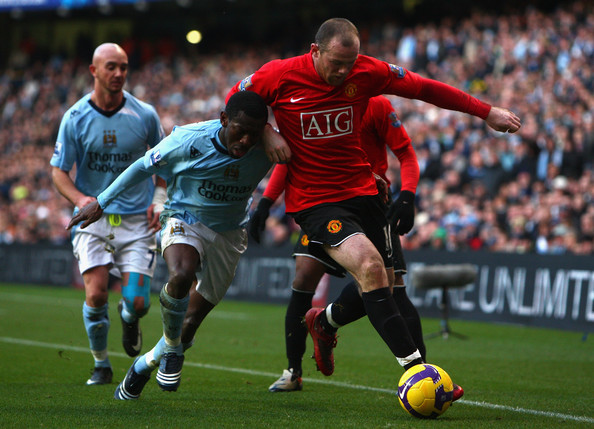 This has to be the most eagerly anticipated derby in years, nay decades. Well certainly in my lifetime anyway.

City’s start to the season, culminating in the 4-2 defeat of Arsenal last weekend, will have surely seen United supporters with even the deepest of hatred towards our city neighbours at least acknowledge that they have, thus far, looked impressive.

Many quarters are even rather prematurely suggesting that Mark Hughes’ side are ready to mount an assault on the top four and even a serious title challenge. Well with all due respect, it’s one thing struggling past the likes of Blackburn, Wolves and Portsmouth but it’s quite another coming to Old Trafford and getting a positive result.

The record books and any chat of previous meetings shouldn’t really count for much on Sunday but here’s a brief overview for the statistically conscious among us. In total, United have won 61 of the 151 Manchester derbies that have taken place including a double victory in the league last season. If you needed even more reason for optimism, City have only won one of their 12 trips to Old Trafford since the inception of the Premier League.

Following the midweek triumph over Besiktas there are no fresh injury worries although Rio Ferdinand remains a massive doubt having missed the game in Istanbul. That will mean that Jonny Evans will continue to develop his partnership with Nemanja Vidic at the heart of the defence in front of the ever-improving Ben Foster.

At full-back Sir Alex will look to Patrice Evra and probably John O’Shea while Nani and Antonio Valencia should start on either flank having performed well, if not spectacularly, on Tuesday evening.

Having been rested for the Champions League opener, Darren Fletcher will come back into the side and with Paul Scholes suspended, Anderson or Ryan Giggs should get the nod alongside the Scot with Michael Carrick missing out.

Now a Ferguson line-up wouldn’t be complete without some sort of tactical surprise although this United fan is sincerely hoping that the manager opts for a 4-4-2 formation with Dimitar Berbatov and Wayne Rooney spearheading the attack.

City’s attacking problems have been well documented heading into Sunday’s encounter, with Craig Bellamy the only fully fit and available striker at their disposal. Carlos Tevez may well receive a tirade of abuse if he plays but Ferguson believes that the absence of Emmanuel Adebayor, who is serving a three-match suspension for his Arsenal antics, is far more significant.

“I am not bothered whether Tevez plays or not – Manchester City’s best player won’t be playing,” the United boss said.

“Adebayor is their star player, there is no question about that. He has scored in every game so far.”

Ferguson went on to claim that City behaved in an “arrogant and cocky” manner by unveiling their now rather infamous Tevez ‘Welcome to Manchester’ poster and the Scot insisted that he sees fixtures against Liverpool as the true derby matches.

“To me, Liverpool has always been the derby,” he added.

“It is because of the history. My aim was always to do well against them. It is hard for me to think any other way.”

Personally I would get hold of a replica of the poster and hang it in the dressing room before kick-off. If the player’s are looking for an added incentive to be fired up for the derby then that would surely provide it.

Anyway, back to previewing the game and there’s no doubt that Hughes’ side will fancy their chances at Old Trafford and probably more than they ever have done before. Given the millions they have spent on fresh talent in the summer and the fact they are currently unbeaten in the Premier League adds fabrication to that notion but, if you can excuse the cliché, it’s all about what happens on the pitch come Sunday.

The United squad certainly have nothing to fear themselves and should be full of confidence. Having put a Tottenham side, who were riding the crest of a wave in a similar vein to City, to the sword last weekend, they continued to ridicule the niggling suggestions that there isn’t life after Ronaldo.

Without wanting to tempt fate, it is off the back of that hugely encouraging performance at White Hart Lane coupled with a burning desire to put City in their place that will hopefully see United home to a comfortable and comprehensive victory.

Altogether now: This is how it feels to be City…

Want two free pairs of tickets for the United – City game on Sunday?
Latest in the ‘Welcome to Manchester’ Pixel Wars…