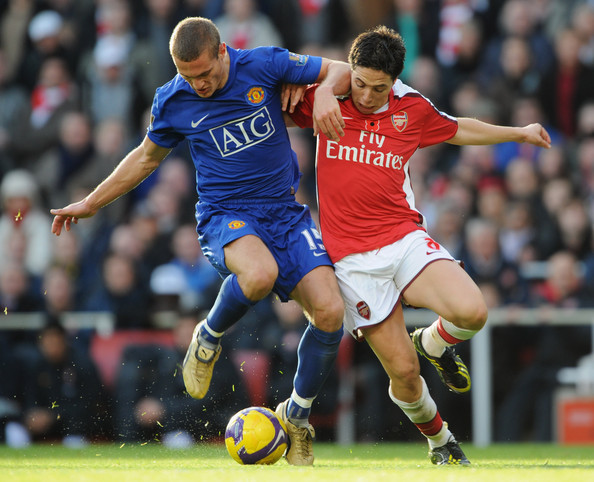 So here we are then. With just three competitive (if you prefer not to count the Community Shield as meaningful) games of the season played, we face our first big test in the shape of Arsenal.

While last season’s meeting at Old Trafford in the Premier League was hardly of massive significance, tomorrow’s encounter will certainly provide a decent benchmark to how we are shaping up in terms of our title credentials this campaign.

The big news? Cesc Fabregas will NOT be playing for the Gunners. Now while I don’t like to single out opposition individuals on the impact they can have on a game, Fabregas has looked pretty darn impressive in the opening couple of games this season. Given our own injury worries too, his absence should certainly provide a welcome boost.

I doubt you’ll need reminding but Rio Ferdinand continues to miss out for us with a thigh injury although a return against Spurs on September 12th has been pencilled in as a realistic comeback date. Despite Jonny Evans’ concerns over his own fitness, it would appear that he will continue to play through the pain barrier to line-up alongside Nemanja Vidic at the heart of the defence.

Ben Foster will undoubtedly continue to deputise for Edwin van der Sar between the sticks while I expect Patrice Evra and John O’Shea to vacate the two full-back berths. In central midfield we (well Sir Alex really) is faced with something of a conundrum. After Anderson’s well documented paddy, will Fergie continue to leave him out despite the Brazilian’s eagerness to brush the incident under the carpet. Michael Carrick was another to miss out against Wigan but with Darren Fletcher pretty much a nailed on starter, I predict it will be one of Carrick or Anderson to come in ahead of Scholes.

Following a decent, if not inspirational, performance from Antonio Valencia against his former club last weekend, he should start on the wing with Nani continuing on the opposite flank. That said, Park has always seemed to perform well against Arsenal so I wouldn’t be at all surprised if he does make the starting eleven. That leaves the inevitable strikeforce of Wayne Rooney and Dimitar Berbatov as I can’t see Owen getting the nod in a game of such significance.

In his pre-match press conference Sir Alex has called for our results to improve against the so-called big four (where we only won one out of six last term) but he has played down the significance of tomorrow’s clash with the Gunners.

“With 35 games left, you can’t say that this game will be decisive,” he said.

“But what means a lot to us is that last season against the top teams we dropped six points to Liverpool, five to Arsenal and two to Chelsea. We really need to address that and do better in these games. One opportunity comes along on Saturday and I hope we take it.”

In an ultimately similar fashion (gone are the days of a Wenger-Ferguson feud I’m afraid), Wenger has admitted that he is desperate for Arsenal to prove they can pick up victories away from home against the club’s fighting for the title. Prior to beating Chelsea in November last year, the North Londoners hadn’t beaten a top four club away from home since 2006.

“We want to show that we can win the big games away from home,” he said.

“This is a good opportunity to do it. We know we go to Old Trafford with a good belief and that is very important before a big game like that.”

Whether Arsenal will be more up for the game considering we outclassed them over two legs in last season’s Champions League semi-final remains to be seen but in terms of our recent record against them, we’re certainly on top, especially at Old Trafford.

Arsenal have clearly come flying out of the blocks this season and I believe it’s going to be just as much a test of our credentials as it will be for Wenger and his side. Freshness may be a factor later on in the game with Arsenal having played against Celtic in midweek although at this early stage of the season I can’t see it being too much of a hindrance to them.

Despite the loss of Fabregas, the likes of Arshavin, van Persie and Eduardo all have the ability to cause us problems which is why I’m tentatively predicting a draw as the outcome.

Is Arjen Robben worth a punt? Here are some stats
The Tuesday Theory: Time for extended Foster-Care?