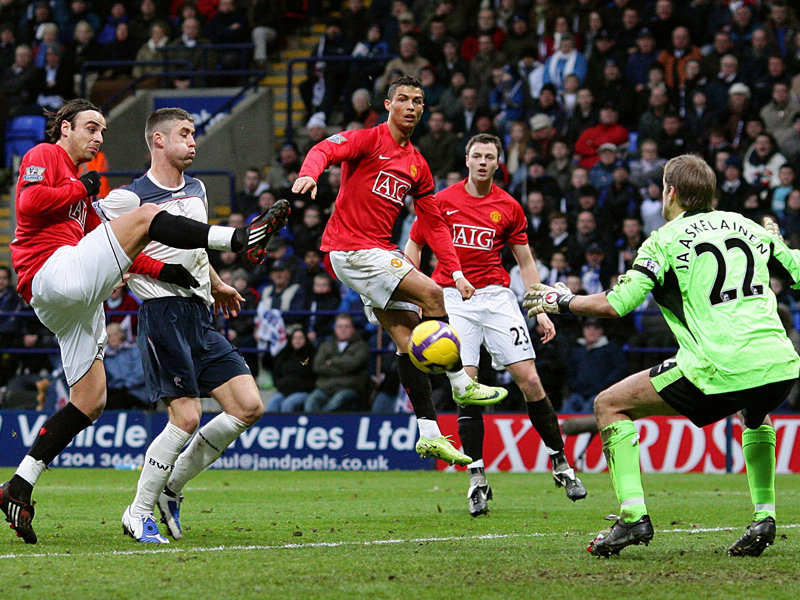 International week is finally over and at last we can look forward to the return of the Premier League. The international break probably couldn’t have come at a better time in fairness as most of the lads were afforded the opportunity to escape from the club environment following the pedestrian performance against Sunderland.

Bolton at the Reebok is never easy. Bolton at Old Trafford, on the other hand, should be fairly straightforward. Although following the events of a couple of Saturday’s ago and the fact that Wayne Rooney is out, the Trotters at home becomes a far tougher hurdle to negotiate.

Anyone who watched England’s victory over Belarus in midweek will have noticed Ben Foster nudged his way back into international contention. While he still looks as nervous as ever when the ball’s in the air, a world class save from point blank range certainly went some way in helping him book a spot on the plane destined for South Africa.

Unfortunately for Foster, it looks like sporadic appearances in the Carling Cup await him for the rest of this season at United. Edwin van der Sar’s long awaited return is finally upon us as the Dutchman successfully completed ninety minutes for the reserves last Tuesday and his first team return now looks rather ominous.

John O’Shea should resume at right-back following a string of impressive displays with Patrice Evra bombing up and down the left. While I don’t want to be drawn into the Rio Ferdinand debate too much, my argument is that form is temporary, class is permanent. Rio is certainly lacking confidence at the moment and you’d be foolish to ignore that point but the only way Fergie is going to build his confidence back up will be by giving him games. I would be surprised, nay shocked, if Rio didn’t line up alongside Vidic on Saturday.

In midfield, both Nani and Valencia scored for their respective nations over the past week and will be battling it out for a starting berth on the right. Following a prolonged period of rest one would suspect Ryan Giggs will get the nod but it becomes something of a guessing game for the central midfield pairing. Given that Scholes should be afforded plenty of room to assert his authority, expect him to start alongside Fletcher.

Upfront it would appear that Michael Owen has managed to shake off his recent groin problem so he should start and depending on whether Berbatov returns from Bulgaria in time, Ryan Giggs may be moved into a more advanced position. Coincidentally, one more league goal for the Welshman and that’s his 100th in the Premier League.

From a statistical perspective Ferguson should be full of confidence heading into the game having triumphed over Bolton in eight of the last nine Premier League meetings.

As for the pre-match comment, Ferguson has hailed Ben Foster as England’s best option in the goalkeeping department.

“I still feel he [Foster] is the best English goalkeeper around,” the United boss said.

“He has been outstanding in a lot of things. The save he made on Wednesday [for England against Belarus] was typical of his performance level with us, too. They are a demonstration of the guy’s ability.

“But he still has not had a lot of game time and experience. His injuries have curtailed the progress he was making.

“He is only going to get better, though, and there is no question he will be a fantastic goalkeeper.”

Bolton boss Gary Megson, meanwhile, has insisted that he won’t go to Old Trafford with the same mentality as the Sunderland side that claimed a point a fortnight ago.

“Sunderland got a good result there two weeks ago, but it doesn’t mean to say everybody going there is going to get a good result,” he said.

“It’s not a blueprint, the way Sunderland played – the game just went that way for them.

“To play exactly the same way Sunderland do, or like any other team, you have got to have exactly the same players – so we have just got to go there and look at what is best for ourselves, not at what other football clubs have done in the past.”

After last weekend I’m sure most United fans, myself included, would just be happy with three points and a decent performance whatever the final result on Saturday. It will certainly prove a big test with regards to our ability to cope without Rooney and what a golden chance this could be for one Michael Owen.