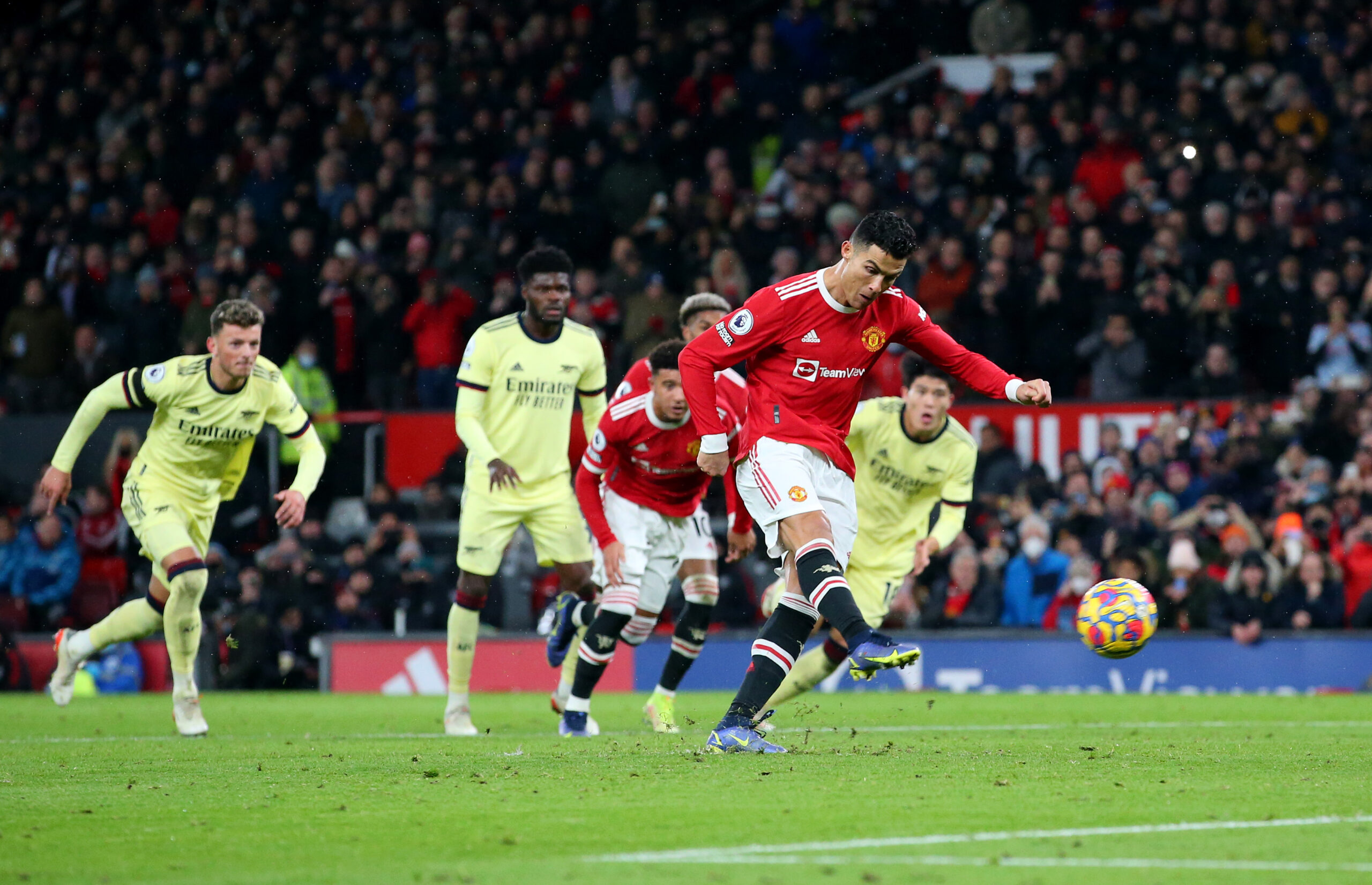 Having failed to beat the Gunners in six previous top-flight meetings, the Red Devils had a huge motive to pick up the three points in front of attending home fans.

But it didn’t start well for the three-time European champions.

United started the game on the back foot, giving possession away cheaply while struggling to get the ball back.

Meanwhile, Arsenal’s sustained high press brought them in a couple of decent scoring positions early on, but the finishing touch was not there for the visitors.

However, Mikel Arteta’s side broke the deadlock 13 minutes into the match via one of the most bizarre goals in the Premier League this season.

Fred stepped on David de Gea’s toe after Arsenal’s corner, with the Red Devils goalkeeper staying on the ground in pain.

Atkinson blew the whistle only after the ball rolled in the net, but it was too late for the home side as Arsenal took a well-deserved lead.

The Gunners’ early advantage shook Michael Carrick’s men up a bit, urging United forward, but as was the case with Arteta’s side earlier, clear-cut chances were at a premium.

It was the case up until the 44th minute, when the Red Devils exchanged a few quick passes to get Fred into an advanced position, with Bruno Fernandes finishing off the Brazilian’s delightful lay-off.

A 1-1 half-time draw gave both sides everything to play for in the second half.

A frantic start to the second period witnessed chances on both ends, with De Gea pulling off a vital save to deny Gabriel’s powerful header in the 46th minute.

But the highly-rated Gunners youngster was powerless to stop the Portugal captain’s well-driven low effort in the 53rd minute.

Ronaldo latched onto a precise pass inside the penalty area from Marcus Rashford, turning the ball into the bottom far corner to complete the turnaround.

United’s celebrations were short-lived as the under-fire defence switched off once again.

Alex Telles allowed Gabriel Martinelli too much space on the left, with the Brazilian finding Martin Odegaard unmarked in the box.

The ex-Real Madrid man sent his first-time effort into the bottom right corner to restore a stalemate just two minutes after Ronaldo’s strike.

Fred, who had a topsy-turvy game, found himself in another crucial situation in the 68th minute, drawing a penalty for his side.

Ronaldo stepped up to the task, hammering the ball home from the spot to give United their second lead of the night, though this time around, Arsenal failed to recover.

Second-half substitute Bukayo Saka escaped Telles’ sight to find himself in a prime opportunity to draw the Gunners’ level, but Fred made a match-winning block.

And when Arsenal struggled to capitalise on their chances, United’s blistering counter-attack led by Jadon Sancho nearly resulted in the home team’s fourth.

The resurgent winger carried the ball over the field and set up Bruno on a silver platter, but the Portuguese ace was slow to react, allowing the defender to block his low shot.

United stood firm until the final whistle to grab an all-important victory and whittle down the gap on fourth-placed West Ham United to three points.

A hard-fought come-from-behind triumph over bitter rivals could be just what the Red Devils needed to get their stop-start Premier League campaign up and running.

Carrick, who remains unbeaten in his three competitive matches in interim charge, leaves his post ahead of the arrival of caretaker boss Ralf Rangnick this weekend.

The German strategist is expected to make his managerial debut at Old Trafford on Sunday when United play host to Crystal Palace at the Theatre of Dreams.