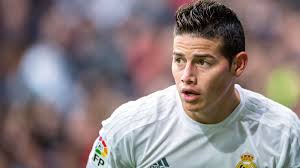 Real Madrid star James Rodriguez has revealed that the Champions League winners have received a €85 million (£71.1 million) bid for his services, but he stressed that he will not leave the Spanish capital club in the summer transfer window.

The 25-year-old joined the Spanish giants from AS Monaco in the summer of 2014. He had an impressive spell with Colombia in the 2014 FIFA World Cup, where they lost to host nation Brazil in the quarter-final.

Since joining Madrid, things have not gone as per Rodriguez’s plan. Even change of manager before the start of last season made no impact has he spent majority of the first half of the 2015-16 campaign on the sidelines.

After Zinedine Zidane took replaced Rafael Benitez, he even saw his first team opportunities being limited. Last season, he made only 17 starts in the La Liga. This has seen him linked with a move away from his current employers.

The Manchester Evening News reported that Manchester United manager Jose Mourinho is looking at the option of signing the Colombian international in the summer transfer window. In addition to this, Spanish newspaper AS claimed that Paris Saint-Germain are also looking at Rodriguez.

However, the former FC Porto star has put the recent speculations linking him with a move away from Madrid to bed by suggesting that he is happy at the club.

“I know that the club received an €85m bid for me, but I’m not leaving. I will stay at Real Madrid, I will succeed here. I will fight to earn my place. That’s my dream,” Rodriguez told Marca.

Rodriguez will join Real squad later this month and Zidane admitted that he will hold talks to discuss regarding his future.

“James Rodriguez is a Real Madrid player. He will be back on July 26 with Sergio Ramos and Luka Modric. I will speak to him then, like I will with everybody,” Zidane said.

“I won’t say that James isn’t part of the first team. He is important to us, sure he has played less, but I don’t see him as a substitute. Every time he could play he picked him, and the same will happen this year. We have a very big squad, and it is tough to pick the team. But I will always do the same thing: play the most competitive side.”