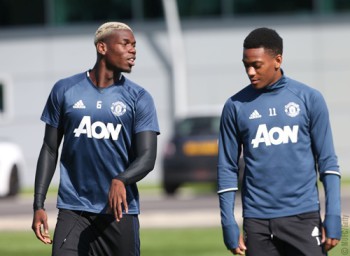 Manchester United star Anthony Martial has provided a latest update on his recovery from his injury as the forward has confirmed that he has returned to training on Friday. The 20-year-old picked up an injury in the Red Devils’ 3-1 defeat to Watford at Vicarage Road on 18 September.

The France international missed the 20-time English champions League Cup victory over Northampton Town during the midweek. Martial has already been ruled out for Leicester clash, but the player confirmed he has returned to training.

Jose Mourinho’s side will face the Premier League champions at Old Trafford on 24 September. There were reports he would be fit to face Claudio Ranieri’s side after he earlier revealed he is “feeling much better.”

However, the Portuguese tactician has already confirmed the ex-AS Monaco man will not be included in the squad for the clash against the Foxes. In addition to this, the former Real Madrid and Chelsea manager has also explained that Martial is recovering from contusion and not concusion as reported earlier.

“Martial is not available. He is out because of the contusion in the calf and ankle area. I think you know when that happened,” Mourinho said in his pre-match press conference, as quoted by the Manchester Evening News.

The pacey forward arrived at Old Trafford on the deadline day of the last summer transfer window. He impressed in his debut season and his form saw him make it to France squad for the Euro 2016, which they lost to Portugal in the final.

Martial has failed to replicate his last season’s form and is yet to get his name on the scoresheet in any of the competitions he has played under Mourinho.