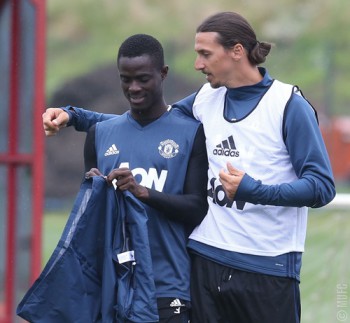 Manchester United summer signing Eric Bailly has managed to beat  Zlatan Ibrahimovic and Daley Blind to bag the club’s Player of the Month award for August.

The 22-year-old was Jose Mourinho’s first signing at Old Trafford as the central defender completed his switch to Old Trafford from Villarreal. He was followed the former Barcelona and Paris Saint-Germain striker to the Premier League.

Ibrahimovic has scored four goals in four matches, which includes a winner in United’s 2-1 victory over Leicester City and a brace against Southampton in the Premier League clash at Old Trafford.

However, the Swedish star failed to beat Bailly after the Ivory Coast international was voted by several fans – via Twitter and United’s official website. Bailly bagged 55 percent of vote and was 18 percent ahead of Ibrahimovic. The Dutch international had 8 percent and was third, behind his centre-back partner and the striker.

A statement on United’s official website read, “Eric Bailly is the convincing winner of Manchester United’s first Player of the Month award for the new season.”

“The Ivory Coast international has made an instant impact at Old Trafford and earned the Man-of-the-Match accolade in three of the Reds’ four games last month, only missing out when Zlatan Ibrahimovic was star man in the 2-0 win over Southampton.

“Thousands of supporters cast their votes on Twitter and ManUtd.com with the 22-year-old beating off competition from fellow summer signing Ibrahimovic (37 per cent) and his defensive partner Daley Blind (8 per cent) to land the trophy with 55 per cent of the overall tally.”