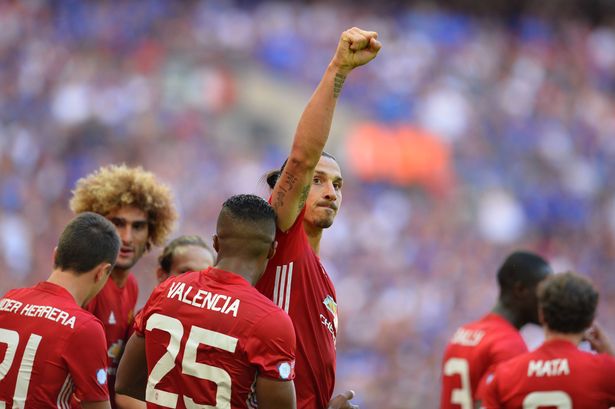 We begin our 2016-17 Premier League season at Bournemouth on Sunday with more optimism among fans than at any point over the past three seasons since Sir Alex’s retirement.

The arrival of José Mourinho, Zlatan Ibrahimovi?, Henrikh Mkhitaryan and imminent transfer of Paul Pogba has certainly got many fans excited.

Mourinho has already played down our chances of the title after finishing 5th last season and work to do strengthening the deference and getting goals out of the attackers.  The smart manager playing his mind games already!

Here’s a look at how far we can go this season:

New signing Eric Bailly has looked solid pre-season and in the Community Shield.  He appears to read the game well and dive into challenges.  Comfortable on the ball too.  The Ivorian should start alongside Chris Smalling during the season but has not had an opportunity to form a partnership since his arrival this summer.  Smalling is also suspended for the season opener.

Mourinho should immediately fix many of the problems we had at the back under Louis van Gaal when we were dependent on David de Gea time and time again keeping the goal tally down.

Paul Pogba’s arrival in midfield will certainly be a massive upgrade on Marouane Fellaini and the ageing Michael Carrick.  The 23-year-old is box-to-box with a lot more energy than the aforementioned duo.  He’s not a liability in comparison to Fellaini either and is a goalscoring threat with his long-range shooting and aerial abilities.

It was interesting to see Jesse Lingard start the Community Shield with both Henrikh Mkhitaryan and Juan Mata named among the substitutes and making an appearance in the second half.  However, the winger did score a solo effort in the first half.  How many starts will he get in the Premier League though?

There’s no telling what Mourinho plans to do with Mata right now.  He previously sold the Spaniard to us as Chelsea manager and then replaced the substitute in stoppage time of the Community Shield which appeared to upset the playmaker.  Both players offer more than Wayne Rooney does in the number 10 role too.

What will Zlatan Ibrahimovi? give us?  Well we’ve already seen glimpses in the pre-season friendly against Galatasaray and then the Community Shield.  A goal in each.  However, the Swede is only going to be as good as the service he gets.  He is lethal in the box and good from outside the area but a lack of pace means hell only create chances for himself when the ball is played into his feet or onto his head.

Mourinho has other options in Marcus Rashford, Rooney and Anthony Martial to switch things around but Ibrahimovi? is one of those players who can be quiet for 90 minutes and pop up with a late winner.

Defensively we were solid after a nervy start when Jamie Vardy made two good runs at the defence.  Marouane Fellaini gifted Leicester their goal with a shot backpass, otherwise David de Gea wasn’t tested.  This is typical José Mourinho and I’m sure all of the defence can learn something from the Portuguese coach and his staff.

As the season progresses I’m hopeful we’ll see Chris Smalling and Eric Bailly form a solid partnership at the back as Mourinho has previously done previously with pairs at the likes of FC Porto, Chelsea, Internazionale and Real Madrid.

Is Antonio Valencia set to be the first choice right-back this season?  It will be an interesting call with the former winger as he was a liability there under Louis van Gaal.  Promising start in the first competitive game of this season though.

The centre midfield partnership of Michael Carrick and Marouane Fellaini once again made us look vulnerable.  However, I don’t see these getting much time at all, if any, in the Premier League, once Paul Pogba arrives.  Ander Herrera and Morgan Schneiderlin finished the game there – don’t be surprised if Mourinho turns the French international into the player he was at Southampton too.

Anthony Martial was well marshalled by the Leicester City defence and he did have plenty of quiet games down the left wing under LvG but it appears Mourinho wants the youngster to play there again.  Is he going to create many chances for Zlatan?  He’s exciting to watch but creating good chances come via his good runs more so than crosses.

José Mourinho said he wanted to upgrade in four positions when he arrived and once the Paul Pogba transfer goes through he will have done just that.

We now have two solid players in every position meaning we can afford to rotate and rest players when needed.  Van Gaal can take some credit for this in blooding Marcus Rashford, signing versatile players like Martial, Daley Blind and Memphis Depay.

The Dutch manager failed to get anything out of Depay, just like he did with Ángel Di María down the left wing.  The only manager in football who failed to make the Argentine international look like the world class player he is.  So don’t be surprised if Mourinho gets the best out of Depay – the youngster was the top scorer in the Netherlands before he came to Old Trafford.

Maybe we should take advantage of some free bet opportunities and back United to win the league?  I certainly believe we’ll be in the top two, if not the top one this season.

City are the favourites with the bookmakers but Pep Guardiola is still looking to do more business in the transfer market with less than a week until the 2016-17 season begins.

The Spaniard has never really built a great defence at his previous clubs – inheriting Carles Puyol, Phillip Lahm and Jérôme Boateng.  Manchester City’s defence was woeful without Vincent Kompany last season – is the Spaniard really relying on the club captain to remain fit for the entire campaign?  He’s already missing the start of the season through injury.

That should be their only weak point though as, like his Barcelona and Bayern Munich sides were, extremely good maintaining possession and scoring goals, City’s attack also have that potential.  Sergio Agüero, Kevin De Bruyne and David Silva offer to do this job for the Citizens.  Don’t be surprised if we see Yaya Touré back to his best either.

No European competition this season will certainly play into Chelsea’s hands.  The Londoners are also excited by Antonio Conte after performing admirably with a below-par Italian side at Euro 2016.

Certainly looks capable of building a solid defence as the Italian backline in France was initially put together by the new Chelsea boss when he was in charge at Juventus.

Still, Chelsea are yet to bring in a new centre-back, and are still trying to secure a deal for Romelu Lukaku.  Leaving it late in terms of the season starting.

N’Golo Kanté is certainly an upgrade in protecting the back four – it felt like he was two players at Leicester City in their shock Premier League title win.  Goodbye John Obi Mikel, Chelsea are much better in this position now.

Signing Michy Batshuayi and wanting Lukaku suggests that Chelsea are going to play two strikers up top this season, with Diego Costa also on the books.  It’s hard to predict how the Belgian will do but his price tag certainly suggests the manager rates him highly.

Arsène Wenger’s side have been made the bookmakers’ fourth favourites despite another frustrating transfer window for Arsenal so far.

They are still yet to upgrade at striker after missing out on Jamie Vardy and Gonzalo Higuaín.  Theo Walcott has even been playing their, unsuccessfully, pre-season.  Olivier Giroud is inconsistent and few seeing him being a regular starter for a Premier League title-winning side.

Arsenal could also do with landing a new centre-back – Laurent Koscielny is the only solid one they have.  Per Mertesacker is slow and a liability, Gabriel Paulista has not looked comfortable in England either.  Is 20-year-old Rob Holding really the answer this season?

Granit Xhaka is an excellent signing though.  Good in possession and setting up attacks.  Typical Wenger holding midfielder in that he has disciplinary issues though.  Plenty of opportunities for rotation here with Francis Coquelin, Mohamed Elneny, Jack Wilshere, Santi Cazorla and Aaron Ramsey.

No European competition this season for Liverpool will surely help their push for a top four finish and maybe make them outsiders for the Premier League title.

This is Jürgen Klopp’s first summer with the Reds and perhaps he will have them better prepared than the inconsistent side who took charge of in October and failed to make them any more consistent during the campaign.

However, he now has a very large squad and I still don’t think he’s upgraded in defence.  Getting rid of Martin Škrtel is a good thing for Liverpool but isn’t Joël Matip another Mamadou Sakho in that he can lack concentration and lose the striker he’s meant to be marking?  Let’s see what Ragnar Klavan can do in the fast-paced Premier League too.  They definitely need a new left-back too.

Liverpool’s strengths are certainly in attack – Philippe Coutinho and Roberto Firmino has the promise to be a real threat this season.  Divock Origi also looks promising and if Daniel Sturridge can finally stay fit then perhaps they can put up some good numbers this season.