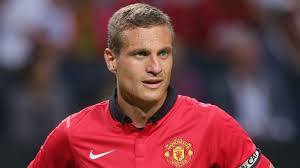 Manchester United legend Nemanja Vidic has revealed he was on the verge of joining Liverpool before making a move to Old Trafford.

The 34-year-old Serbian, who joined the Red Devils from Spartak Moscow in January 2016 went on to become one of the star players under Sir Alex Ferguson.  Liverpool, who were managed by Rafael Benitez then wanted Vidic to join the Merseyside club. However, the 34-year-old joined their arch-rivals after snubbing a chance to join the Anfield outfit.

In an interview with FourFourTwo magazine, Vidic said: ”Yes. Rafa Benitez called me and I nearly went there [Liverpool]”

”I was interested in going but my English wasn’t good and I was struggling to communicate. ‘Then Manchester United came. Fergie called me at my apartment and said: ‘I watched you play for Serbia against France – I want you here. ‘United were decisive. Everything was done very quickly, within two days.” – concluded Vidic.

The centre-half, who formed an outstanding CB partnership with Rio Ferdinand and went on to win five Premier League titles, one Champions League and three League Cups with the Red Devils, has also expressed his desire to become a manager.

“I would like to be a manager, but only if I had the opportunity first to be a coach and learn from someone for maybe one or two years,” he added.

United’s current manager Jose Mourinho signed  Eric Bailly from Villarreal in the summer transfer window. The Ivory Coast international earlier admitted that Vidic was his favourite Red Devils player and is hoping to emulate what the Serbian has done at Old Trafford.

“I like John Terry but, especially, Vidic. I watched them both on television when I was in Spain. They are very strong and powerful, like I try to be,” Bailly told The Sunday Times.

“Terry plays well and plays the ball well but Vidic was more hard and played really hard. He was my favourite player at Manchester United and in the Premier League. I want to be like him with my performances for United.”