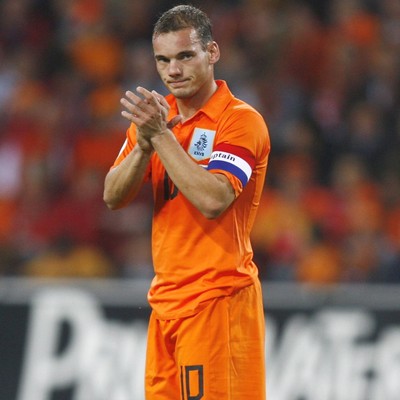 I thought that might grab your attention. I’ll apologise now for falsely raising your hopes and expectations as, let’s be honest, this sort of transfer doesn’t look likely to happen in the immediate future.

Although I have to admit that if I were in Sir Alex Ferguson’s shoes, I would be trying damn hard to ensure that this, or a deal of similar proportions, was completed before the end of the current transfer window.

I know it’s hardly a revelation, but I think it’s plain obvious that we lack a creative spark in midfield that is capable of unlocking even the tightest of defensive systems. Ronaldo was clearly capable of doing that from a wide area but now I believe it’s time for a whole new change of tack.

A direct replacement for the Portuguese would’ve been nice, no doubt. Franck Ribery would’ve gone some way to filling the gap but I certainly wouldn’t have been comfortable parting with anything in excess of £40 million.

I’m of the opinion that if Fergie is so hell bent on changing his formation to accommodate the departure of Ronaldo, an attacking midfielder in the Sneijder mould is exactly what we’re after.

I know many of you will argue that we already have enough decent centre midfielders battling it out for two starting berths in the team. Ofcourse it’s difficult to dislodge Darren Fletcher but I don’t see who else justifiably deserves the other slot.

Michael Carrick definitely brings an array of qualities to the table but while a Hollywood pass and expert vision are pleasing on the eye, Carrick isn’t the penetrative player that I feel we’re crying out for.

Cue goal-shy Anderson. I’m a huge fan of the Brazilian but I have to admit that I’m yet to see the attacking qualities that so many fans rave about. I’m not suggesting for one minute that he doesn’t have that in his locker but he’s yet to really step-up to the plate and demonstrate exactly what he’s all about. Then again it doesn’t help when Ferguson chucks him out on the left wing.

So that leaves us with Giggs, Scholes, Gibson and Hargreaves. Well while I’m certain that Giggs and Scholes are still capable of doing a job in certain games, I don’t feel they should be commanding a place in the side week in week out, for obvious reasons.

As for Gibson and Hargreaves, well the latter won’t be up to much while he continues his recovery and the young Irishman is yet to convince me that he’s ready for regular football at the highest level for United despite a succession of decent performances.

Now, at the cut price he’s inevitably going to be available for, I think Real Madrid’s Wesley Sneijder ticks all the right boxes.

Every time I’ve seen the 25-year-old play he’s never ceased to impress me. While he’s got the ability to beat a man and drive forward, his range of passing is hardly a weakness of his overall game too. Anyone that saw his performances at Euro 2008 will have seen what a quality player he really is and surely he’s got to be worth a punt?

I’m sure many United fans will point to his relatively poor injury record but while he probably won’t last a full season without a couple of trips to the physio’s room, I’d hardly place him in the same perilous category as the likes of Michael Owen.

The best part about the current situation regarding Sneijder? It appears he’s not wanted at current club Madrid. Inter have emerged as the favourites for his signature and, to be fair, that’s where I expect him to end up but if I were in charge at Old Trafford, I’d certainly be tempted to test Real’s resolve.

Note: There was one more post published earlier today (surprise, surprise!). It’s a take on the recent Hillsborough t-shirt incident.

Sports Direct, Hillsborough and fan behaviour
The Tuesday Tantrum: A Fleecing of Fletcher