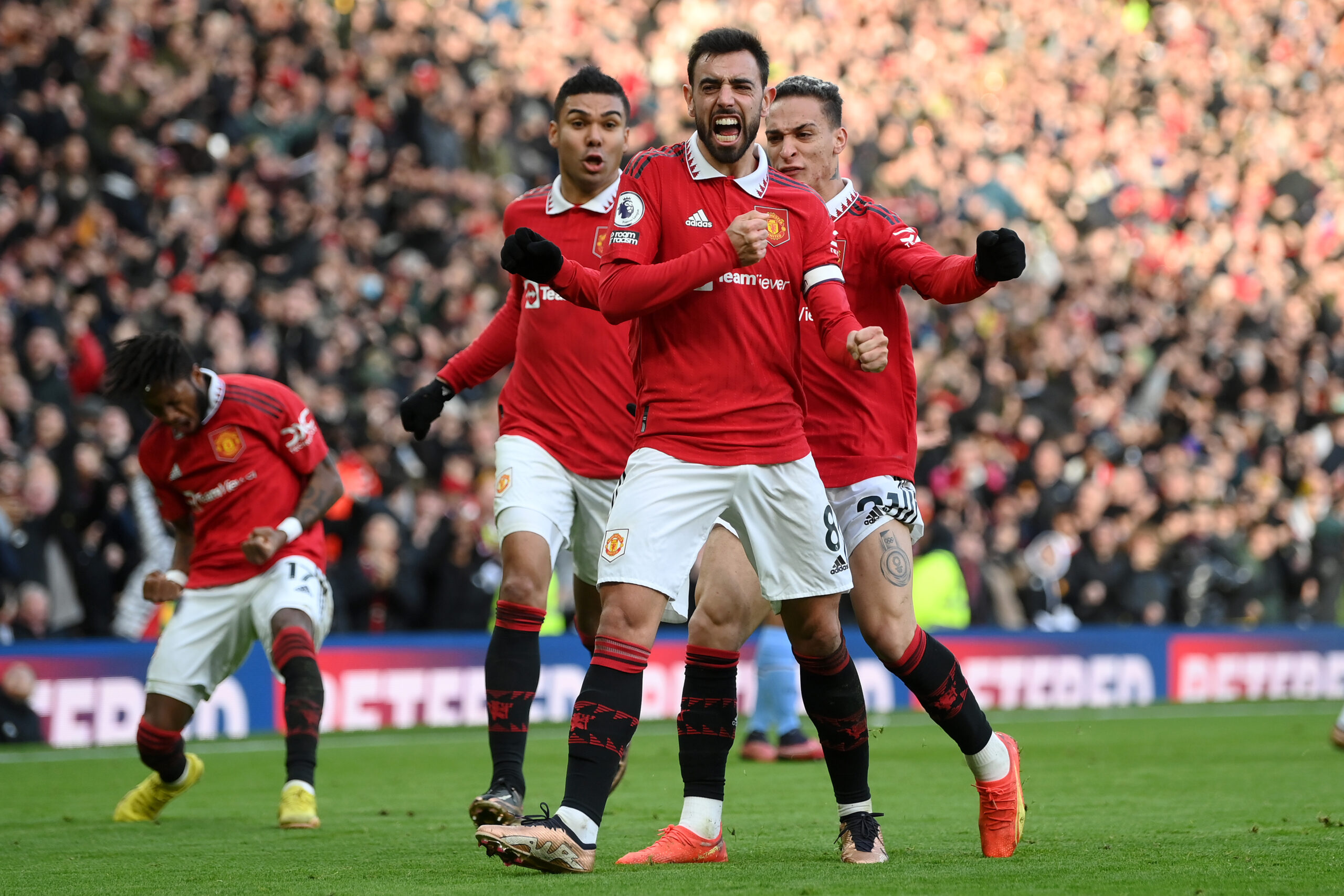 Manchester United made a stunning comeback to beat Manchester City 2-1 at Old Trafford today, sending the home fans into euphoria.

The first half was dull, to say the least. Both the teams were too cautious, but that changed after the break.

Jack Grealish broke the deadlock with a bullet header past David De Gea just three minutes after his introduction.

Pep Guardiola’s men dominated for the first thirty minutes of the second half, but Alejandro Garnacho’s arrival brought energy to the home side.

Bruno Fernandes brought the score to parity with just over 10 minutes remaining on the clock. Marcus Rashford was flagged offside, but the England international didn’t touch the ball and left it for Fernandes who blasted it past Ederson.

The turnaround was completed with Garnacho becoming a provider after Fernandes found him in acres of space. The 18-year-old drilled the cross into the six-yard box, where Rashford stabbed the ball into the net.

Here is what we made of this enthralling derby.

Guardiola mentioned before the game that ‘Manchester United are back’. Well, they certainly are.

After the horror start to the Premier League campaign, no one would have thought that United would be third in the league by mid-January.

With five consecutive wins in the English top-flight, the Red Devils are just a point behind Man City and six points behind league-leaders Arsenal.

Erik ten Hag has changed the atmosphere, both on and off the pitch in the last few months. He won’t admit that United are in the title race yet, but if they beat Arsenal next weekend, the fans will start dreaming about winning the league. Does the hunt begin?

Fred does an Ander Herrera

When United faced Chelsea in 2017, Jose Mourinho asked Herrera to leave everything aside and man-mark Eden Hazard who was at the peak of his career.

The Spanish midfielder did his job to perfection and didn’t give an inch of space to Hazard to perform his magic.

Ten Hag deployed a similar strategy, giving Fred the responsibility to not allow Kevin De Bruyne out of his sights.

The Brazilian did a terrific job in making interceptions and closing out spaces.

De Bruyne managed to get free a couple of times, but his creativity was largely limited, courtesy of Fred.

The 29-year-old midfielder showed that he might not be a regular start anymore but has a huge role to play in the squad.

Bruno Fernandes – the leader by example

One of the best contributions of Ole Gunnar Solskjaer in his managerial reign was to sign Bruno Fernandes.

The Portuguese magnifico has been outstanding for the team since he arrived at the Theatre of Dreams. With Harry Maguire no longer a guaranteed starter, Fernandes has led by example.

To accommodate Fred in central midfield, Ten Hag picked Fernandes to play from the right flank. His creativity is thwarted whenever he is on the wings, but he still does a terrific job for the team.

He reads the game as well as anyone. One example of this was during the first goal when he made the darting run to strike the ball first-time, knowing that Rashford was offside. Without his vision, the second goal would not have been possible either.