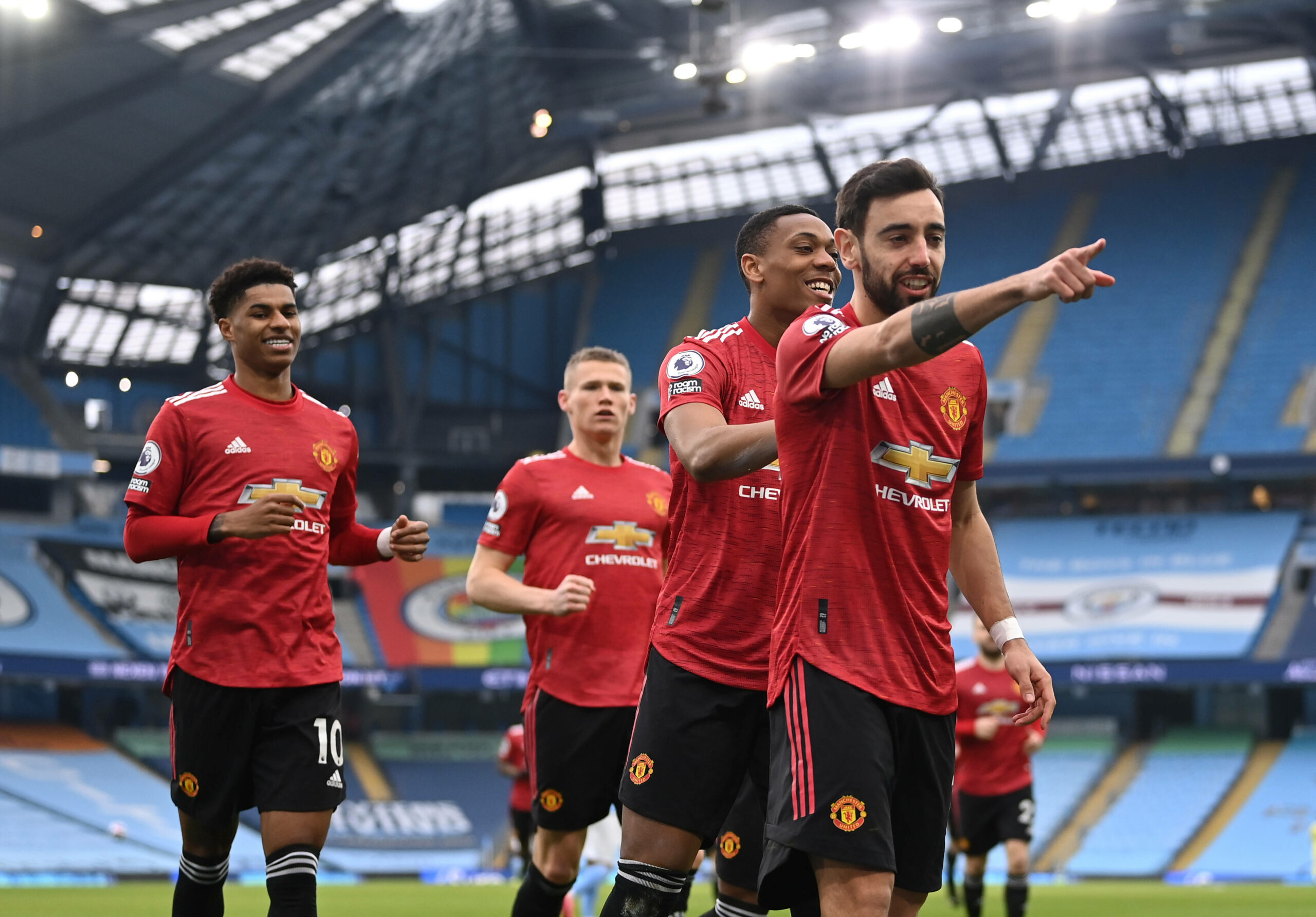 Manchester United put up their second-best performance in 2021 to defeat Manchester City in a titanic top-of-the-table Premier League showdown on Sunday.

The table-toppers found themselves on the receiving end of a 2-0 defeat against United in what was the latter’s most impressive display in the past couple of months.

The last time the Red Devils exceeded expectations was in a 9-0 thrashing of Southampton at Old Trafford in early February.

However, that success doesn’t compare to one against their cross-city rivals and overwhelming favourites to lift the league crown.

Ole Gunnar Solskjaer has become the first United manager to win his first three away clashes against City in all competitions.

Though Bruno Fernandes and Luke Shaw propelled the visitors to a comfortable win, it is likely to be all but a Pyrrhic victory.

Pep Guardiola’s men still have a massive 11-point lead at the summit and are confident of lifting the Premier League crown for the third time in four years.

The encounter at the Etihad Stadium highlighted the contrasting fortunes of the arch-rivals’ respective achievements in recent times.

While the five-time European champions stretched their undefeated away streak in the Premier League to 22 games (W14, D8), City’s 21-match winning streak in all competitions came to a halt.

Gabriel Jesus’ reckless challenge on Anthony Martial only 33 seconds into the game nudged United to a flying start, with referee Anthony Taylor immediately pointing to the spot.

Fernandes squeezed the ball past Ederson to convert his eighth penalty in the Premier League this season and give the Red Devils an early lead.

United were unlucky not to put clear daylight between the sides only a few moments later after Shaw dispossessed careless Joao Cancelo inside City’s six-yard box. His right-footed effort failed to ruffle Ederson’s feathers.

As expected, Solskjaer’s men surrendered the possession to their hosts, who enjoyed 67% of the ball in the first half.

But, Guardiola’s team struggled to create many chances in the opening 45 minutes, except for a few attempts from a long-range distance.

Riyad Mahrez came closest to levelling the score on the stroke of half-time only to see his low-placed shot go wide of the left post.

City nearly levelled at the beginning of the second half, but Rodri’s first-time screamer rattled off the woodwork.

When it seemed the Cityzens could upset United, Shaw’s coast-to-coast run in the 50th minute inflicted a devastating blow to Guardiola’s men.

After carrying the ball from his own half, the 25-year-old completed a one-two with Marcus Rashford and fired a left-foot cannon into the bottom right corner.

The Red Devils almost got their third through Martial, but the Frenchman drilled the ball into Ederson from a point-blank range.

The visitors had Phil Foden’s wild execution from a promising position to thank for not being punished for their striker’s miss.

City maintained pressure until the final whistle, keeping United pretty much inside their opening third but to no avail.

In the end, Dean Henderson kept a clean sheet in his second consecutive Premier League outing to confirm United are back to winning ways.