After weeks of speculation about City fans and the Munich tribute — and the minute’s silence versus the minute’s applause (mooted from some quarters) — we get to the day where we would have to realise that there is a game to be played as well. And, of course, precious three points to be picked.

On that poignant note, we shall preview today’s game.

There is an interesting interview on the Guardian where Ronaldo talks about keeping the shirt. It’s interesting to see him talk about the other shirts that he’s saved after a game. I wouldn’t spoil it for you so go read it to find out. He also talks about the Busby era and comparisons with the current lot. A nice read.

Carlos Tevez meanwhile talks about wanting revenge against City, after feeling ‘hurt’ following the defeat at the start of the season. One of lasting images of that game for us was Tevez’s glancing header that somehow contrived to miss the net. So our Apache has pretty much all reason to want to set things right this time.

He will have a little more responsibility than he has had in recent weeks as Wayne Rooney is suspended today. There have been murmurs that Danny Welbeck might be handed a shock debut. I wouldn’t bet too much on him starting though, although he might be sent on as a sub to give something different to the proceedings. There is a good chance that Ronaldo might be preferred upfront along with Tevez to share the striking burden.

So the starting XI would be more conjecture on my part than it has been so far this season. I honestly feel Scholes and Anderson must start. Scholes, because of the experience and the fact that it’s a derby game, and Anderson, because he’s deserved every bit of it from his performances so far.

Patrice Evra also finds himself out of the side tomorrow due to suspension. John O’Shea would be an able deputy although he wouldn’t have to face the pace of Martin Petrov, who could be a real menace on the left wing — something Brown would have to contend with.

Elano’s injury also means we will see the flying Bulgarian launch their attacks, so our right hand flank would have to be well policed.

Being a derby game our recent form does not count for much, although with the emotions of Munich in the backdrop, one would imagine our players to be extra motivated to go out and roll the bitters over. To be honest, they have been playing a bit crap over the past few weeks.

And before I end this, here’s the kit our players will be wearing for the game. A pity the captain is not playing today. 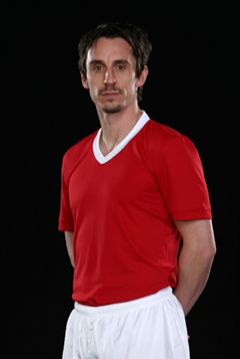