The regulars to this site might be left wondering, and for good reason, why there wasn’t a preview to yesterday’s game posted on this blog. Dear readers, kindly accept my humble apologies. My internet for some reason decided it deserved a holiday — with it being a Sunday and all — and politely conked out so conveniently, just as I started writing the first few lines of the preview.

Well, not only was I denied the chance to write a preview to the game, I just wasn’t allowed access to the game yesterday, as I rely on internet streams usually. An hour was spent arguing with the ISP for this untimely ‘inconvenience’ and I spent some more time crying like a madman, before I realised that I could go to a nearby pub that showed the game. I made it, but could barely see enough to write a match report. It wouldn’t be honest of me, would it?

Anyway, I soothed myself with the MotD highlights and hopefully my agony will be assuaged to some extent once I finish downloading the whole match and watching it. Oh, the internet is fixed now. But the pain of not having watched United terminate the Arse’s season live would still remain.

So once again, accept my humble apologies. I would however defer you all to the excellent comment thread of yesterday (post-match) that had quite a few detailed, and intelligent, analyses of the game. Anyway, I still have some opinions, not necessarily of the match, but some over-arching incidents and issues that could be discussed.

Primarily, was it just me or could others also see the amount of pity showered on the Gunners, by the members of the Fourth Estate, after United effectively ended their season? Fine, they played some good football. They started the season brilliantly defying the same press that wrote them off. But they tapered off because of their thin squad. What I didn’t get was journalists (especially the one on MotD) asking Queiroz and Ferdinand if they felt sorry that Arsenal’s hard work this season has amounted to nothing. I am not trying to say that Arsenal didn’t deserve something (maybe a league cup?). But why does this sound like United, by defeating Arsenal, have destroyed the one team that had the core of footballing principles at heart?

While Queiroz played the diplomatic line, I liked what Rio said — that this is not a time for sentiment. And that, had Arsenal been in our position, they would also have never wasted time feeling for the fallen team. It is this ruthless streak that has seen United keep their head so far and the very lack of it that has seen Arsenal slip by the wayside.

The other thing that follows from the above is the way we won the game today. It’s almost unanimous that we were below par, and Arsenal, indeed, had chances to increase the lead by a larger margin. But we held on, and we won a game where, perhaps, a draw could have been a fair result for Arsenal’s effort. And, yes. United are still discovering more match winners as the season is drawing to a close. Sir Alex will be, no doubt, proud at the way some other players have risen to the demands. Today it was Hargreaves’ free kick and his energetic second half — interestingly, he was started on the right wing — and Anderson, who had a few quiet weeks, who seems to save up his energetic best for the big games.

Blackburn, Chelsea, West Ham and Wigan, I suppose, then. Hopefully Brucie does us a favour today as Chelsea take on Wigan.

To end this, here’s an image from yesterday to brighten up your Monday. 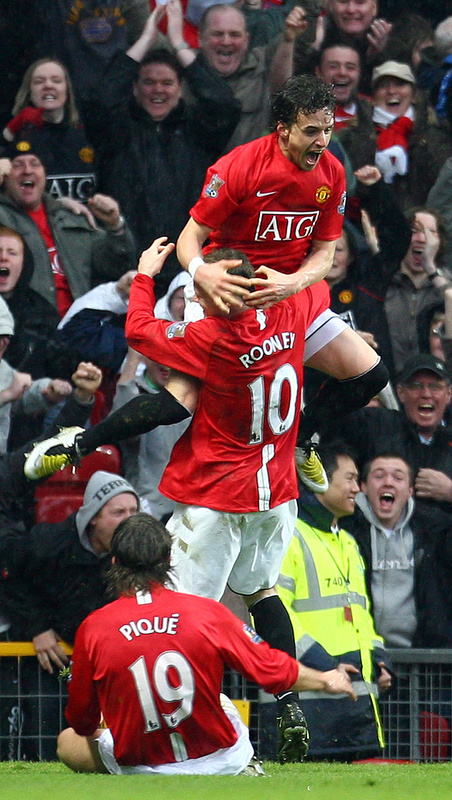 The Attack Of The Hobbits…
Blackburn 1-1 Man Utd: Another Tevez Late Goal