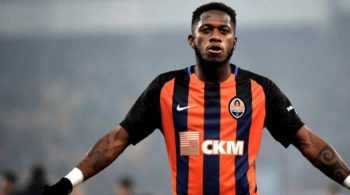 Manchester United are expected to confirm our first signing of the 2018 summer transfer window within the next 24 hours.

Brazil international Fred has successfully completed his medical at Carrington today, according to the reliable Craig Norwood.

The 25-year-old has been strongly linked with a move to us for several weeks now, with reliable Italian journalist Gianluca Di Marzio breaking the news less than two weeks ago that Shakhtar Donetsk had accepted our bid.

Fred has been in England this past week as part of Brazil’s World Cup preparation, beating Croatia 2-0 at Anfield on Sunday.  The central midfielder made his ninth appearance for his country as a late substitute in the first of their final two friendlies before they kick off their tournament later this month.

United boss Jose Mourinho traditionally likes to get his transfer business done before major international tournaments every other summer, so provided all goes through smoothly confirmation of the transfer within 24 hours would be good news for everyone involved.

Brazil are in action against Austria this Sunday before the five-time World Cup winners kick off their tournament against Switzerland on the 17th.  However, the opportunity to see much of our main target this summer is unlikely as Fred is not expected to see much action in Russia.

Fred Rodrigues completed his #MUFC medical at Carrington today, final paperwork to be signed before official announcement in the next 24-hours.

Fred is a central midfielder being brought in to complement Nemanja Matic and Paul Pogba in a central three man midfield as part of Jose Mourinho’s 4-3-3 formation.  He offers good energy in midfield who helps out both in defence and attack.