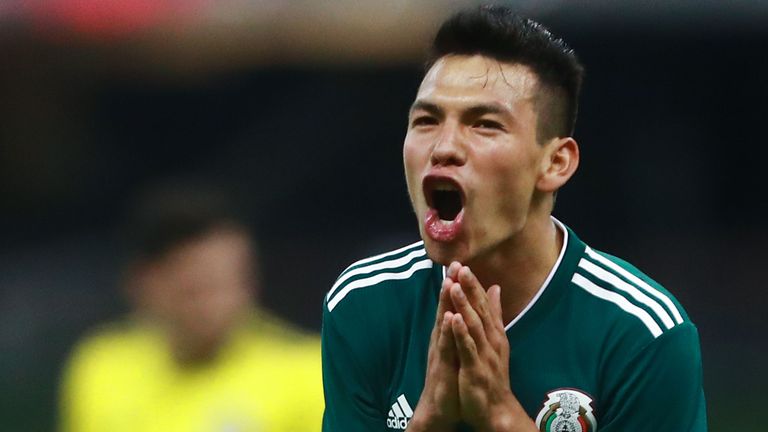 Manchester United have so far completed three deals this summer as Jose Mourinho looks to build a team capable of challenging for the Premier League and Champions League titles next season.

Young full-back Diogo Dalot joined from FC Porto before a deal for Fred from Shakhtar Donetsk finally went through after the 2018 World Cup kicked off.  And last week we sealed a deal to bring experienced goalkeeper Lee Grant to Old Trafford following the sale of Sam Johnstone to West Bromwich Albion.

Now we could be in line to make a very exciting signing as reports from Italy are claiming that Manchester United are set to make a €40 million (£35.3m) offer for World Cup star Hirving Lozano.

The 22-year-old lit up the World Cup in the opening days with the only goal of the game in Mexico’s surprise 1-0 win over defending champions Germany.

Lozano is coming off an incredible debut season with PSV Eindhoven where he was the Dutch Eredivisie top scorer from out wide; scoring 17 goals in 29 league appearances.

The pacey Mexican forward is equally capable of playing down the left wing as he is the right and did split time on each side for the Dutch champions last season.

Italian outlet Tutto Mercato Web are making the claim that we are preparing the offer to PSV Eindhoven, though whether they would accept a bid of around £35 million for the highly-rated forward remains to be seen.  Yes, the Netherlands often supplies players at a bargain but with the interest from Barcelona and other top European clubs for Hirving Lozano will give the Eindhoven club an opportunity to demand a big transfer fee.

However, the report does go on to stay that we are set to begin negotiations with PSV in the coming days.

Jose Mourinho wasn’t settled on a right winger last season with Juan Mata, Jesse Lingard and Marcus Rashford among others getting time down that side.  We have been linked to a few players in this position so it wouldn’t come as a surprise to see us make a new signing here.  We’d certainly welcome Lozano to Old Trafford that is for sure.

Hirving Lozano offers pace and a great goalscoring threat from out wide, as well as setting up some goals for his team.  He is an excellent weapon on the counter-attack, as shown at this summer’s World Cup.