The 15 greatest Manchester United players of all time 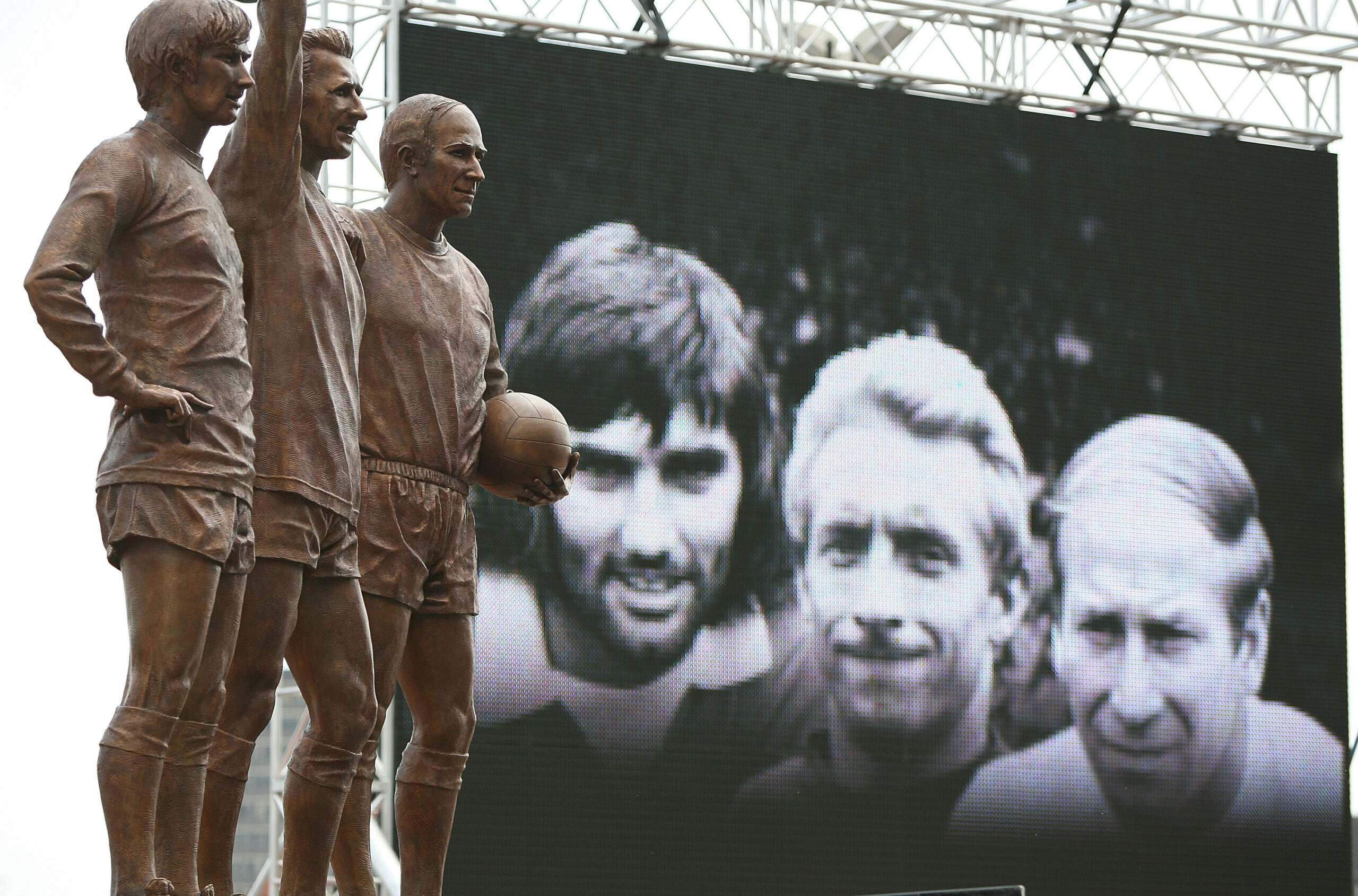 Manchester United have been blessed with some of the greatest footballers of all time, enshrined in history as true legends.

Ballon d’Or winners, European Cup winners, league winners – the club has had some of the best in the business don the hallowed red jersey.

Here’s a humble attempt to list 15 footballers who we believe epitomised what it meant to play for United.

Roger Byrne was the most ideal captain that Sir Matt Busby could have asked for.

Manchester-born and bred, Byrne was the proverbial ‘father figure’ of the Busby Babes.

A full-back who could also occasionally play as centre-back, Byrne played 33 times for England.

Aged just 28, Byrne sadly passed away in the Munich Air Disaster in 1958.

At £30 million, Rio Ferdinand became the most expensive defender in the world when Sir Alex Ferguson brought him to Old Trafford from Leeds United in 2002.

That said, United got their money’s worth, and more, from the former England centre-back.

Six Premier League titles and a Champions League winners’ medal are testimony to Ferdinand’s rock solid presence at the back for United.

Ferguson later described the amount as the ‘bargain of the century’.

Schmeichel was omnipresent in goal for United in the 1990s, which was arguably the club’s most successful era in its 143-year history.

The Danish football legend won five league titles at Old Trafford. He was also a part of the legendary squad that won the historic treble in the 1998-99 season.

Schmeichel would have perhaps ranked a bit higher on this list had he not moved to Manchester City in his later career.

There have been few players in Manchester United’s history who have been as passionate about the club as Gary Neville.

A United academy graduate from the famed ‘Class of 92’, Neville was United’s undisputed right-back throughout his career.

Neville won a staggering eight Premier League titles at United and is one of three Reds to have won two Champions League titles.

Often cited as the ‘least talented’ among his peers, Neville’s longevity is proof of what an underrated player he was.

Blessed with an analytical mind, Neville currently is one of the most respected football pundits in the world.

He may not have had the flair of Zinedine Zidane or the vision of Xavi, but few midfielders in the game’s history ‘got the job done’ quite like Roy Keane.

A typical no-nonsense box-to-box midfielder, Keane was instrumental in United dominating English football in the 1990s and 2000s.

His performance in the 1998-99 Champions League semi-final against Juventus in Turin is widely regarded as one of the great captain’s performances in recent memory.

It did not end well, but for however long Keane was at Old Trafford, it was brilliant.

A driving force at Old Trafford who practically carried the club single-handedly in the 1980s, Robson was the catalyst in Ferguson’s early success as United manager.

Captain Marvel, as he was popularly known during his playing days, Robson was, for the large part of his United career, the first name on the team sheet which goes to show how much the manager trusted him.

How good was Duncan Edwards can be gauged by the fact that he already had over 150 appearances for United at the age of 21.

Edwards sadly passed away in the Munich Air Disaster in 1958. By then, he was tipped to be a future England and United captain.

“He was the only player who made me feel inferior,” said Sir Bobby Charlton on Edwards.

“Duncan was without doubt the best player to ever come out of this place, and there’s been some competition down the years.

“He was colossal, and I wouldn’t use that word to describe anyone else. He had such presence – he dominated every game all over the pitch.

“Had he lived, he would have been the best player in the world. He was sensational, and it is difficult to convey that.

“It is sad there isn’t enough film to show today’s youngsters just how good he was.”

Cristiano Ronaldo signed for United as an 18-year-old in 2003 and left in 2009 as the world’s most expensive footballer.

Ronaldo’s meteoric rise at United helped United win three consecutive Premier League titles between 2007 and 2009 with a Champions League sandwiched in between.

Fast forward to 2021, the prodigal son returned to Old Trafford for a second time, signing a two-year contract at the club.

A hat-trick and an assist in the Champions League; there has never been a better performance from a United player.

But what cemented his legacy as one of the greatest United players of all time was when he surpassed Sir Bobby Charlton as the highest goal scorer in the club’s illustrious history with 253 goals.

A steal at £1.2 million, Eric Cantona completely changed the dynamics of the club.

He is highly regarded as the missing link that Ferguson was looking for to establish a footballing dynasty.

Cantona’s signing from rivals Leeds will undoubtedly go down as one of Ferguson’s shrewdest transfer deals.

Paul Scholes was so good that he retired and then came out of retirement to win another Premier League title.

A ‘Class of 92’ fellow, Scholes never played for any other club besides United.

One-third of United’s Holy Trinity, Denis Law was for a long time United’s all time top scorer with 237 goals.

Signed from Italian club Torino, Law spent 11 years at Old Trafford during which the club won its first ever European Cup title in 1968.

His greatness and legacy were immortalised with a statue along with Sir Bobby Charlton and George Best in front of Old Trafford.

Has there ever been a ‘cooler’ United player

Blessed with blistering pace, artistic flair and an eye for goal, George Best is the best No 7s of all the No 7s that have played for the club.

Best scored in extra time in the European Cup final against Benfica in 1968 and capped off an excellent year by winning the prestigious Ballon d’Or award.

Ryan Giggs holds the distinction of winning the most number of Premier League titles with 13.

That fact alone should justify him being so high on this list. He also happens to be the highest appearances holder for United with a staggering 963.

A United academy product, Giggs was one of the best wingers in the world for a considerable period of his career.

His 1998-99 FA Cup semifinal goal against Arsenal is still one of the best goals ever scored on English soil.

Towards the end of his career, Giggs modified his game to play a more central role than an out and out winger.

Captain, leader, legend – there won’t be many United fans who would argue the fact that Sir Bobby Charlton is decidedly the greatest player to have ever donned the hallowed red kit at Old Trafford.

A 1966 ballon d’Or winner, Charlton captained the United side that won the 1968 European Cup by beating the Eusebio-led Benfica in the final.

The second highest goal scorer for United with 249 goals, Sir Bobby is one of the greatest goal scoring midfielders the game of football has ever seen.

Before Robin van Persie and Ruud van Nistelrooy, there was Tommy Taylor. If the Dutchmen were prolific in front of the goal, Taylor was a genius.

David de Gea has been the only constant in the United starting XI since making his debut for the club in 2011.

One of Ferguson’s astute purchases, De Gea has bailed out United more times in the last decade than any other player.

Seven Premier League titles, three FA Cups and a Champions League win are a testament to Denis Irwin’s prowess as he was the undisputed left-back for Ferguson in the club’s most successful period.

One of the greatest centre-backs to play for United, Bruce scored an astonishing 19 goals in the 1990-91 season and won three Premier League and three FA Cup titles among other honours at Old Trafford.

If George Best, Sir Bobby Charlton and Denis Law were the swords, Nobby Stiles was the shield.

He was instrumental in United winning the 1968 European Cup.

Serbian centre-back Nemanja Vidic is often cited as one of Ferguson’s great buys.