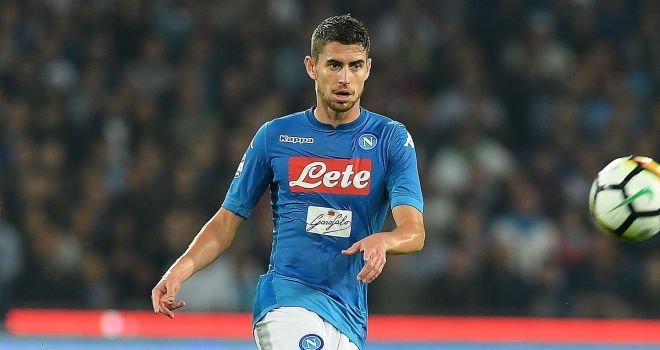 Manchester United will be busy during this summer’s transfer window as we need to add a few replacements in centre midfield.

Michael Carrick has announced his retirement at the end of the season whilst Marouane Fellaini appears to be letting his contract run down.  This would leave us with only four options in the middle of the park having recently switched to a 4-3-3 formation.

We have been linked to a number of high-profile players for possible transfers and now the Independent are reporting that Napoli midfielder Jorginho could be signed ‘to succeed Michael Carrick’.

The Brazilian-born Italian international came through the youth ranks at Hellas Verona before joining Napoli in 2014 where he has gone on to make 155 appearances in all competitions for the Serie A title challengers.

Jorginho has two goals and four assists in his 28 league appearances for Maurizio Sarri’s side who head into the weekend four points behind leaders Juventus who they face on Sunday.

The 26-year-old offers good protection of his defence and a short passing game to help start attacks.  He would be a more mobile option in the middle of the park to partner Nemanja Matic in winning and maintaining possession for Jose Mourinho’s side.

However, Napoli are keen to keep hold of their best players and Jorginho’s agent, Joao Santos, even played down a summer transfer for his client only last month.

Santos said in an interview with Radio Crc:

“I don’t know what Napoli’s strategy is. But if any club wants to sign Jorginho and Napoli agree, we can evaluate the offer. But Jorginho is not looking for a new club because he wants to stay at Napoli.”

Whether it’s Jorginho or not you can be sure there will be a central midfielder or two joining Manchester United over the summer.