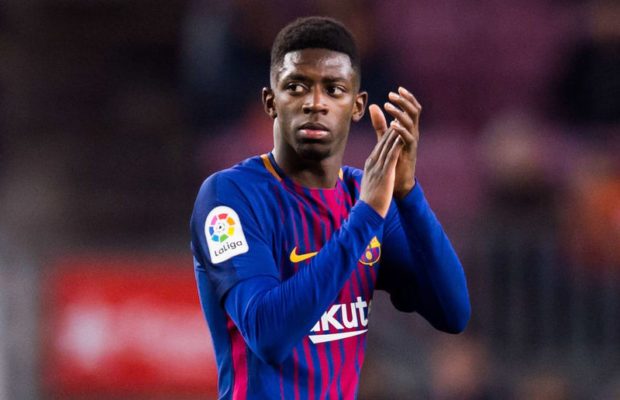 Manchester United could be set to make one of the deals of the summer, if reports in Spain today are accurate.

Spanish outlet Don Balon are reporting that we hold the lead over Chelsea, Bayern Munich and Paris Saint-Germain in the race to sign Barcelona’s Ousmane Dembele.

The report claims that the 20-year-old has long dreamed of playing for Manchester United and is prepared to leave Camp Nou to sign for us.

It goes on to say that Dembele has already rejected advances from Chelsea, Bayern Munich and PSG for his signature, which could be a huge coup for us.

However, Ousmane Dembele did only become the second most expensive player in the world when he signed for Barcelona from Borussia Dortmund last summer, and he’s also a left forward – the same position we already have Alexis Sanchez, Marcus Rashford and Anthony Martial playing in.

Reports have suggested that we are going to sell Martial this summer due to a lack of playing time, but even then we’d be in the same situation next season with three talented players sharing the same role.

Ousmane Dembele’s debut season at Barcelona has been hampered by injuries and the January signing of Philippe Coutinho from Liverpool.  However, whether the runaway Spanish La Liga leaders would be prepared to accept an offer from us remains to be seen.

Barcelona paid £96.8 million up front for the French international last summer with the deal potentially worth as much as £135.5 million due to add-ons.  He was signed as a direct replacement for Neymar who had joined Paris Saint-Germain earlier in the summer.

There’s no doubt Ousmane Dembele is already very talented with even more potential ahead of him, but it seems hard to believe that he would be up for a move to Manchester United so shortly after joining Barcelona.  We’ll see if anything comes of this story over the summer…