It wasn’t a vintage United performance. Not in anyone’s wildest dreams. However, it was a game where we controlled things completely. There were moments where it looked like we were getting our stride back. But for most part, we drifted to familiar territory that we’ve seen this season. Nevertheless, the performance was much better than what we’ve seen over the past few wins and it looks like we might actually shift several notches over the coming weeks.

United started the match on a very bright note — Wayne Rooney, almost instantly, had a shot brilliantly saved by Cech. Fergie, for one, got it spot on with the formation. With Mourinho out, SAF realized Chelsea were there for the taking and the 4-4-2 formation clearly signalled his intentions. Familiar faces were played in familiar positions and we got the results we so desired. Giggs on the left, Ronaldo on the right, Tevez partnering Rooney, Carrick with Scholes, the back four of Brown-Vidic-Rio-Evra keeping it tight at the back — they were a return to a formation that’s always worked for us.

After the initial burst, things became a little even before Obi Mikel was sent off for a straight red. Now we have seen players not being sent off for worse offences, but I am with Mike Dean on this decision. That is not to say, however, that the ref was anywhere near approaching good. He seemed completely out of his depth and unsure at times. It is thanks to the absence of Mourinho — who would have surely raised hell and some conspiracy theories — that we had a mostly incident free match. It must be reiterated at this point that the ref did have a pretty inconsistent game. If Mikel was sent off then, surely, Joe Cole had no business being on the pitch after that lunge, from behind, on Ronaldo.

Obi’s sending off certainly shifted the balance of the match and, despite the few chances, we did create something to be in front. At the close of the first half, a half heartedly cleared corner fell back to Giggs who sent in a cross off the outside of his foot to Tevez who sent it a good header from the near post. Whoever said he couldn’t head!

There was surprisingly very little to talk about the second half. We controlled the game and passed it around to death. Carrick had a brilliant game. Two of his long range passes were outstanding. It must be noted, if my memory serves me right, that Carrick gave a man of the match performance last year too against the Rent Boys. There have been many fans asking for Carrick to be axed, but the lad seems to show an uncanny ability to turn up for the big games. The defence again was outstanding — EVDS had nothing to do and Sheva was left totally isolated, thanks to some unimaginative tactics from the ‘Normal One’. 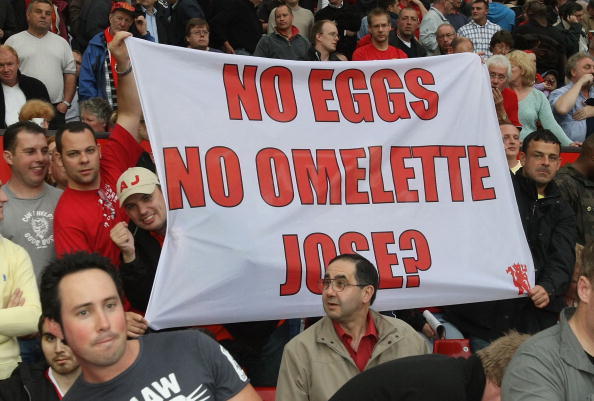 But there might be certain things about the match that wasn’t right. I, for one, wasn’t too impressed with Saha’s theatrics. If I was a rival fan I would be disgusted. And I must put my hand up and say these are the sort of things we don’t want our players to do. When we call Ashley Cole a diving, cheating pig, we should be sure that our players play fair. While the penalty appeal might be debatable, Saha’s exaggerated fall was uncalled for. While I was happy for Tevez to score he was mostly quiet apart from those crucial moments in the first half where he scored. Giggs was also subdued, but he did have a much better game than before, and one of the reasons for that would be his starting on the left side of midfield.

Post-match, this was what Fergie had to say:

â€œIâ€™ve seen the sending off incident and it was maybe a bit harsh, but there was intent there. It could have hurt the boy (Evra) but a lot of referees would have let it go. Then, when you see Joe Coleâ€™s tackle in the second half on Cristiano Ronaldo, that should have been a straight red card. It was right down the Achilles which is happening repeatedly to Cristiano. He got a yellow card, but it should have been red. I think the referee was perhaps balancing it out. The foul on Louis Saha for our penalty was a bit harsh, but I think that cancels out the one we should have got in the first half. We should have had a penalty kick (for Joe Coleâ€™s foul on Evra) in the first half, I think the cameras clearly show that. In tight games like that, the referee has to make big decisions quickly and he can get it wrong.”

I don’t quite agree with refs trying to ‘balance’ out their decisions — one wrong can’t quite make up for the other — but then refs, these days, have a tough job. Although, Mike Dean was way off today.

This was the maximum number of goals we’ve scored in a game this season, and it came against our toughest opposition. It must be said, however, that the Chelsea team we played were a disjoint lot and down to ten men. A Mourinho-led Chelsea would have been a completely different proposition. But points are points, they have to be taken if we are to keep up with our major rivals, who are Arsenal, mainly, and Liverpool. The signs are good and there is a good chance, come Birmingham, we will have our swagger back and get back to spanking teams. Really, it’s about time we started doing that.

Of course, in mid-week, there is the big matter of playing Coventry City in the Carling Cup.