Well, its the first time I’m writing a Utd post… So here’s to hoping I don’t put any of you guys to sleep.

With our recent signings (or ‘to-be’ signings if you want to be picky) on their way in a bid to a) help us defend our title b) help us win other cups and c) provide a long-term solution to some of the older player; the questions on most Utd supporters’ lips are

1) What formation will Fergie and Queiroz employ?
2) What is likely to be our first XI in the opening months?

The answers at the moment are very subjective as most fans (myself included) have hardly watched the likes of Nani and Anderson (apart from YouTube video compilations) so our only source of information on these players is what comes out of Old Trafford and Football Manager, of course

Before I continue, I must say that what I have written below is not what I would do, but what I feel the management will do.

Given the new signings, and the inevitable return of some of our loanees (Rossi, Pique and Evans) there are likely to be some transfers out. I will assume the following players are sold: Richardson, Smith, and that there are no new signings (not even a striker as I think we can manage with Rooney, Saha, Rossi, Ole and not to mention our midfielders and wingers to get us the goals we need). What the new signings have brought us is about a million different permutations and combinations for the manager to mull over – an excellent situation to have. There will be competition for places all over the pitch and as a manager, you always want that. In addition, we now have strength in depth – something we haven’t had for some time and consequently, we won’t tire as we did at the back end of last season. 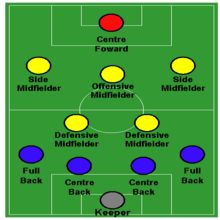 I believe that Fergie will be using primarily 2 formations next year: the 4-2-3-1 (shown above) and the 4-3-3 (Europe away and big games in the EPL). I prefer the former because of the style and attractive football it produces. The latter is one I feel many Utd fans will wince at because of the reminiscence it brings of Chelsea (who used this formation before Sheva and Ballack arrived) and the fact that whenever Utd have employed it, it has horribly backfired. But, I say, Chelsea play boring football whatever formation they use (look at this year) and the 4-3-3 has never worked for us as we have never had the right personnel for it to work. We never had a Hargreaves type player and Rooney was always shunted to the left where he is atrociously ineffective in comparison to being in the centre.

Regarding Wayne, many (myself included) feel that he is best playing as a second striker (behind the main striker) or ‘in the whole’. Long-term, I believe that this is the position he will occupy but for the forthcoming season, especially if we do not sign another striker, I get the feeling that he will be the main striker (Saha is unlikely to go through half a season unscathed and for those wondering, the reason I did not assume he will be sold is that I believe we will only get 3-4m for him because of his injury proneness) .

I also believe that Rooney is capable of getting us 30 goals (all competitions), provided that he gets the support from the wide men who cut in when we are in the final third much like Messi and Ronaldinho at Barca. In Anderson, Nani and Ronaldo, I think, we have players who can do this for us to devastating effect. They all have super dribbling skills (from what I have seen of Anderson/Nani), pace and with regards Ronaldo/Anderson, great strength on the ball. These 3 together with Park (who is under-rated and also unlucky with injuries) will be our main wingers for the season ahead regardless of the formation.

You may ask, what about Giggs. I see Fergie using Giggs more in the centre as the player behind the front man, a role he performed at the start of the season where he produced some super displays and the role that Rooney played later on in the season. The reason I see Giggs more and more in this role and less and less on the wings is that I seriously believe that he has lost a lot of pace and no longer is as good taking on players as he was. This is understandable given that he is 33 and has spent the best part of 16 years buccaneering down the left. What he has lost in terms of pace, he has more than compensated in other aspects of his game which make him more suitable for the role behind the front man. His intelligence on the ball, vision and passing have improved and, in addition, playing in the centre should give him a couple more years at the highest level.

I think it is quite obvious that of the 3 signings, Hargreaves is the only one that is likely to be a first team starter in the early months of the campaign. Utd have missed a ball winning midfielder ever since Keano left and he certainly fits the bill. At 16m, he probably is a tad overpriced but like Carrick, I think he will prove to be a fantastic acquisition, especially in the long-run. Talking about the long-run, Fergie clearly has gone with a Gattuso-Pirlo-esque combination; in Carrick we have the deep-lying playmaker (Pirlo) and Hargreaves the more warrior, hard-working type (Gattuso). If the Carrick-Hargo combination can be nearly as effective as the Milan pairing, Fergie would be over the moon.

Back to the present, I feel that in the EPL, Fergie will only use 2 of the 3 world class central midfielders at his disposal (Scholes , Carrick, Hargreaves) and that the preferred combination is probably Hargreaves-Scholes although Carrick and Scholes can be rotated. Another option is to play Scholes behind the main striker in the 4-2-3-1 and pair Hargreaves-Carrick in the midfield. I am not so sure if this is what Fergie is planning as Scholes has never played so far up the pitch since the last time we won the league (02-03) when he had an outstanding season playing behind Ruud. If you look at last season, Scholes often played deep (a role Carrick will assume when Scholes retires) and looked to spray passes and dictate the game from there. A role he performed admirably.

In Europe, especially away in big games, I can envisage all 3 playing in the 4-3-3 with Rooney, Ronaldo plus one of Anderson, Nani, Giggs, Saha… up top in a counter-attacking formation. This would be more effective than how it worked against Milan away or Chelsea in the Cup Final mainly because of the addition of Hargreaves that means the 2 wide men (Giggs, Ronaldo..) can provide the main striker (probably Rooney) with more support when attacking – something that was clearly lacking in those games. Lets just hope Rooney is shunted to the wings again.

I hope I’ve covered the main talking points above regarding team selection. For the 4-2-3-1 system, I believe the following would be the first team, in the early months:

Once again, just to remind you guys, these aren’t what I would do (I would employ the 4-2-3-1 regardless of who we play and which competition) but I do believe that Fergie is hell bent on making the 4-3-3 work and he will employ it in big games.