LVG: “We owe a big performance to the fans” 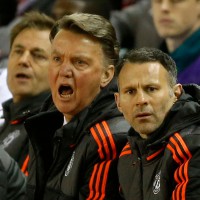 Louis Van Gaal has admitted Manchester United owe fans a result after a dismal season that has seen them drift away from a top four finish in the Premier League and on the verge of being knocked out from the Europa League.

United host Liverpool on Thursday night and will need a miracle if they’re to overturn the 2-0 defeat they suffered at Anfield a week ago. However, Van Gaal insisted his side has a chance to progress to the quarter finals and the crowd will play a big part in it.

“We always owe the fans a big result because the fans are paying to see that,” said Van Gaal.

“So we have to deliver. But in sport you can lose and you can win. That you have to accept.

“I’m satisfied with the fans, because the results that we have achieved are not the results the fans are thinking we have to fulfil.”

Van Gaal admitted United fans have had little to be happy about this season and it was up to the players to deliver.

“We haven’t fulfilled their expectations, yet still they support this team and this manager,” he said.

“We need their support also, because their impact is big. The players and myself want to survive and go to the next round.

“That’s the pressure and the challenge. It’s a big challenge for the players and the fans.”