LVG hints he could quit 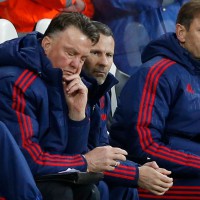 Louis Van Gaal has hinted he could quit Manchester United after admitting he has let the fans down after failing to meet their expectations during his 19-month spell at the club, which a fresh turn for the worse on Saturday as United lost 1-0 at home to Southampton.

The defeat leaves United in fifth place, four point adrift of fourth-placed Spurs and piled even more pressure on the Dutchman, whose side have scored 16 goals in the last 16 league games and have picked up just seven wins from their last 22 in all competitions, winning five of their last 16 Premier League games.

“I’m very disappointed that I cannot reach the expectations of the fans,” he said.

“They have – or they had – great expectations of me, and I cannot fulfil them, so I am very frustrated because of that.”

Asked whether he was remained committed to United and convinced he could turn things around, Van Gaal replied: “This question I shall never answer to you. We had to win this game and we could have won – but it’s not happening.

“You have to play football to entertain the fans. I don’t think we have entertained the fans, so they can be very angry.”