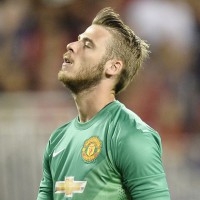 David De Gea will not be in the squad for Manchester United’s trip to Aston Villa, Louis Van Gaal confirmed on Thursday afternoon.

In his pre-match press conference, the United manager said the Spaniard will sit out United’s second game of the season as he still suffered from “the same problem”.

Van Gaal’s comments add to the ongoing saga surrounding United’s number one, who has repeatedly been linked with a move to Real Madrid this summer after refusing to extend his contract at Old Trafford.

“There’s no difference. The transfer period is still open and he [De Gea] has still the same problem.”

Sergio Romero, who marked his United debut with a clean sheet on Saturday, is expected to retain his spot in the starting XI and it’s highly unlikely De Gea will feature again until the transfer window shuts.

LVG not bothered by critics
Fast start crucial for United