Louis Van Gaal and his formula for success 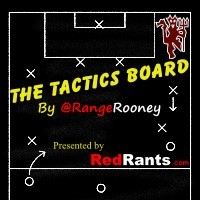 After a disappointing season under David Moyes leaves United missing out on Champion’s League football this coming season and a truly awful viewing experience for even the most hardcore Red Devil fan, the board did what they should have done a year earlier and conducted an extensive search for a suitable manager to ensure they didn’t repeat the errors made replacing the retiring Sir Alex Ferguson.

After appointing Louis Van Gaal as the new manager, he went on to lead the Dutch national team to an unexpected third place finish in the 2014 FIFA World Cup.

During the qualification campaign for the World Cup, the Netherlands national team played in a similar manner to his previous club teams, including Bayern Munich, AZ, Barcelona, and Ajax. His team frequently lined up in a 4-3-3, with the occasional 4-2-3-1, with a strong emphasis on ball control and possession. This was much as was expected, as Van Gaal was never a big proponent of reactive football, frequently saying that it was the responsibility of the other team to adapt to him, not the other way around. His team looked strong during the qualifiers, but the loss of Kevin Strootman to a knee injury in March 2014 caused serious upheaval in the run-up to Brazil.

In the qualifiers, Kevin Strootman was used in a midfield three, providing a strong defensive workrate with decent passing ability. His presence allowed Rafael Van der Vaart and/or Wesley Sneijder to focus on their creative attacking duties while Strootman himself still provided a better than average attack. So important was the Roma midfielder that Strootman was considered one of only three players who were assured of a spot in Brazil, and his loss caused Louis Van Gaal to completely change his system.

A huge proponent of possession based football through a 4-3-3 formation, Van Gaal went almost completely against what people knew about him. He abandoned a 4-3-3/4-2-3-1 system and switched to a 3-5-2 to provide additional defensive cover and exploit the talents of Robin Van Persie and Arjen Robben. Instead of dominating possession, he was happy to allow the opposition to control possession and hit them quickly on the counter-attack. In the first game against Spain, the Netherlands won 5-1 with 35.5% possession.

In the final group stage, a 2-0 victory over Chile, the Netherlands managed just 31.5% possession. Instead of playing a high pressing possession game, his team defended deep, only pressing when the ball entered the midfield zone. He made up for the youth of his back line by ensuring he always had a spare defender at the back, using the experience of Ron Vlaar in the middle of the back three. The left and right center-backs marked their man closely, with Ron Vlaar providing a last man defence.

In the midfield, Van Gaal used a close man marking system. He had great success with this system, preventing his opponents from having the time necessary to play accurate passes to targets against an average Dutch back line. He used Nigel de Jong as a midfield destroyer, with similar defensive attributes to Kevin Strootman but he is much more limited in his passing and attacking abilities. De Jong marked the most advanced opposing midfielder, which frequently ended up being their most dangerous midfielder in the attack. In this role, de Jong’s defensive strengths really benefited the team, as his fous was almost entirely defensive, which meant that the opponent never had opportunities for their number 10 to get goalside of de Jong.

In addition to the loss of Strootman, Rafael Van der Vaart was ruled out with a knee injury so that meant 2 of the 3 starting midfielders in Van Gaal’s 4-3-3 system were missing in Brazil. With the loss of Van der Vaart, Van Gaal opted to play Jonathan De Guzman or Georginio Wijnaldum along side Nigel de Jong. Instead of the creativity that Van der Vaart would have brought, De Guzman and Wijnaldum impued the midfield with a more workman like character. They didn’t offer the same passing ability that Van der Vaart, but they were better defensively than the Hamburg midfielder.

In the run up to the World Cup, when lined up in a 4-3-3 or a 4-2-3-1, Robin Van Persie would play up front with Jeremain Lens on the left wing and Arjen Robben. With the switch to a 3-5-2, Arjen Robben moved up top alongside Van Persie while Lens was left on the bench. In this system, playing mainly on the counter-attack, Robben’s speed came good as he was frequently able to get behind the opponent’s defense. In the victory over Spain, Daley Blind was able to loft two balls from the left wing-back position over an advanced Spainish defensive line. One fell to Robin Van Persie for an exceptional header, and the other fell for Arjen Robben. With the Dutch defense only pressing the ball when it came into the midfield, Van Persie and Robben were able to frequently able to position themselves for quick counter-attacks behind the opponent’s center-backs. With the opponent’s right-back trying to get forward to help overwhelm the Dutch defense out wide, Arjen Robben always had acres of space in behind him and this was a recurring theme through their games in Brazil.

As the Netherlands got into the knockout rounds, their game started to struggle as they came up against teams that were also looking to play on the counter-attack. When the Dutch controlled possession, and had to break down a compact defense, as they came up against in Costa Rica and Argentina, they struggled with their lack of creativity in the midfield. They were able to advance against Costa Rica through penalties, but their luck ran out against Argentina.

Many were surprised to see the Dutch play a three man defense in Brazil, but it’s not an unknown system to Louis Van Gaal. In his early days at Ajax, his team frequently lined up in a 3-4-3. Playing a 3-4-1-2 system at Manchester United allows Van Gaal to take advantage of the strengths of his squad, while also cover some of the weaknesses. This system allows him to play both Wayne Rooney and Robin Van Persie up front, while playing Juan Mata, Shinji Kagawa, or Adnan Januzaj in their preferred number 10 role. It also allows him to cover for a weak defense, which will hopefully be addressed before the end of the transfer window. 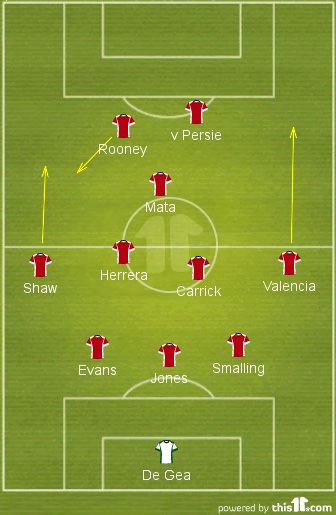 In defence, he will be able to play Phil Jones as the central defender, with Chris Smalling on the right side. Jonny Evans would play as the left sided defender, as Van Gaal prefers to have a left-footed player in that position. Additionally, playing Luke Shaw at left wing-back will take maximum advantage of his attacking abilities while giving him some defensive cover. At right wing-back, Antonio Valencia would fulfill this role well as his attacking abilities are wasted when he plays at right-back, but his defensive workrate is sufficient enough to make him a decent wing-back.

In the midfield, Michael Carrick would play as the deepest midfielder. While Carrick is a good defender, his skill set lies more in his positioning and his reading of the game, not his physical strength or his tackling ability. An upgrade to a more physical deep midfielder would certainly help United in this area. Alongside Carrick, Ander Herrera is exactly the type of midfielder that United has needed for several years. An excellent all-rounder, a true box-to-box midfielder who doesn’t have many weaknesses. His play with the ball at his feet, and his eye for picking out a devastating final ball makes him an invaluable addition. He also adds something that United has been sorely missing, a scoring threat from the midfield.

An attacking trio of Rooney, Van Persie, and Mata is one of the best attacks in the Premier League. It allows everybody to play at their natural position, and get the best from them. There were periods last season, under David Moyes, when United attacked with all the potency of a Byzantine Eunuch. Juan Mata on the right wing was not his best position, and he was frequently left on the fringes of games. While Wayne Rooney is a good number 10, he is more dangerous up front and Mata offers more creativity as a trequartista than the England striker.

There are a few downsides to the Red Devils playing a 3-4-1-2. Like the Netherlands, they will struggle when they are playing against another team that is looking to counter attack. Also, you end up playing with no true wingers, so if the wing-backs get pinned back by the opposing teams full-backs, this formation can struggle from a lack of width. Additionally, the attacking midfield is one area where Manchester United is strong, but most of these players will be left on the bench. Shinji Kagawa, Jesse Lingard, and especially Adnan Januzaj, will be left on the bench most games as Juan Mata will get most of the minutes in the number 10 role. 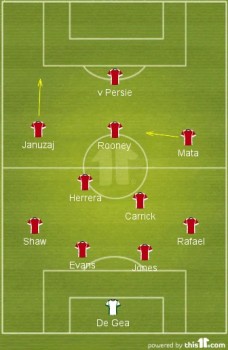 To deal with some of these problems, we could see United play a more traditional 4-3-3 or 4-2-3-1 against weaker teams or teams who are looking to counter-attack. This line-up would resemble ones that we saw frequently last season, with a couple of tweaks. The addition of Ander Herrera beside Michael Carrick would offer much more creativity and attacking drive from the midfield than we got last season from Fellani or Fletcher. I also think we’ll see Van Gaal play either Rooney or Mata behind the main striker, and use a true winger on the right side.

The big change to United’s attacks will come not just from formations, but from the speed of the attack. In the two games that United have played so far in their tour of the United States, they move the ball much more quickly than they did under Moyes. They transition quickly from defence to offense, and Van Gaal is a big proponent of possession with purpose. He doesn’t subscribe to the philosophy of possession for possession’s sake, which is currently en vogue in Spain. The players don’t sit on the ball. They move it quickly, which causes the defence to lose shape and gaps to open up that the Red Devil’s attacking talents can exploit. This will be the main change that fans will see from United this season as opposed to last. No more of the Sisyphian transitions we saw under Moyes, were the defence was allowed to regroup and organize before United could get forward. The speed with which United has been able to turn defense to offense so far in the tour has been impressive, and you can see what Van Gaal is building towards. It’s been impressive so far, and will definitely land United back in the top 4. A few more additions in the transfer market, and you could see the Red Devils putting up a title challenge again this season.