Ljajic transfer about-face is a strange one

We’ve often seen Ferguson express interest in young players. Hell, as we speak, he must be looking at a host of young promising footballers who could become the next star at our club. A few months ago — well, nearly a year ago, to be correct — United completed deals for Zoran Tosic and Adem Ljajic from Partizan Belgrade. The transfers saw Tosic move to the club immediately but Ljajic join the side in January 2010.

Only recently, about a couple of months ago, Ferguson was quoted as being rather excited about his arrival:

Given all the talk about him and the fact he plays for Serbia’s Under 21s even though he’s only 18, we hope we will be granted the permit.

Of course, there is also the small issue of actually having paraded him along with Tosic at Old Trafford like the picture below, and manutd.com doing a Q&A with him. [Manutd.com never does such things till something is completely done.] 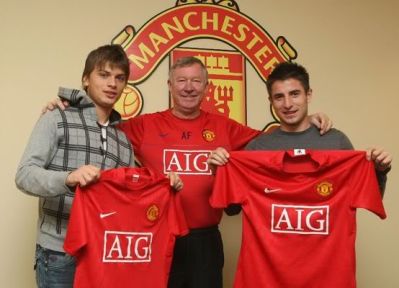 The comparisons of showing interest in players and then dropping them won’t necessarily apply here, because this was a done deal [with the option to reject clause in it, of course] and money was obviously budgeted for this back in December.

The statement from United obviously was a strange one because it suggests we’ve suddenly decided he wasn’t that good after all. It’s quite possible he isn’t as good as he was being made out to be despite overwhelming opinion on the contrary by most accounts. However, the Ferguson quote — that they were looking to apply for a work permit and their excitement about the player — does not quite add up. It’s really odd if they went scouting his matches after Ferguson made that remark just to be sure he’s good.

This brings us to the obvious questions swirling around in the media that we’re skint. Despite such fears expressed by all and sundry, as well as the lurking fear at the back of most United fans’ minds about our financial situation — there is little hard evidence in the open to prove we are doing badly. We haven’t had egregious problems dealing with banks on our loans like the Liverpool owners have, nor have we defaulted on our payments so far. The only thing we can base our judgements on, is by our spending in the transfer market.

Even then, it’s hard to say anything tangible, because Ferguson’s transfer dealings have often confounded fans and pundits alike only for them to be proven wrong. At the moment, the Glazer ownership has one positive — which is to ensure a manager doesn’t just throw money around for the heck of it: something Ferguson was guilty of when he went on a spree buying the likes of Bellion, Djemba-Djemba, Kleberson and the like. That scatter gun approach taught him to be more prudent. Most of Ferguson’s buys during the Glazer era has been astute. Vidic, Evra, van der Sar for instance. Even Park’s purchase was a good one at the time. We have seen a clear directive (although not explicit) that Berbatov was the exception in the deal to buy players under 26.

A lot of thought needs to be put before we buy players, instead of spending for the sake of satisfying shareholders. [I am not saying the Glazer model of club ownership is right, mind; far from it.] Another instance of this approach is when we didn’t throw crazy money at Tevez. Perhaps, Ljajic is just us being sensible in the market. Maybe he really isn’t that good. Maybe we are saving up now because we intend to have someone lined up for January.

Well, we’d better. Because, at the moment, most fans are forgiving and believe either of two things. One: that Ferguson genuinely believes players are overpriced in this market, or two: that Ferguson honestly believes this side is good enough to last this season.

However, despite a favourable comparison in the goal tally, with respect to last season [although last season, in my opinion, is not an ideal we should be aspiring to, as we limped across the finish line] I am not entirely convinced about a majority of the performances put in this season. I am willing to concede this is a transitional season, and in a season of transition one looks to build a side good enough to dominate the future. But that is a discussion for another day.

United’s handling of the Ljajic affair is hard on the boy, and has been generally abysmal. It goes against the grain of the club’s excellent reputation as far as handling young players is concerned. But, there are already feelers in the media that this money could be put to better use on more ‘ready made’ stars. If that’s the case, I’m fine with it. If not, I will be fine with that too, but the seeds of doubt about our finances actually affecting our decisions in the transfer market — dormant so far — could germinate.

Edit: Phelan in the press conference today gave a different reason for the club deciding against Ljajic:

Mike has just been asked about why Serbian youngster Adem Ljajic is no longer joining the club. Apparently the club were unable to gain a work permit for Ljajic in time for when they had to make a decision about whether or not to sign him. He also added that money was not an issue.

So yesterday they said he wasn’t good enough. And today they say it’s a work permit issue. You’d think a club like Manchester United would at least invest in decent PR.

Also, United Rant who’d emailed the Man Utd communications department, got a response from them here.