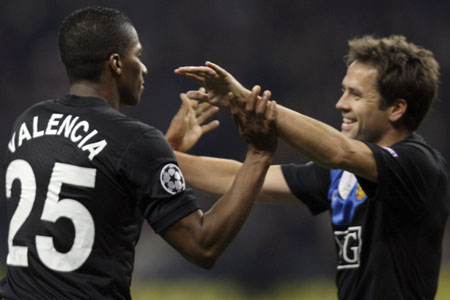 Could there really be a better time to beat Liverpool? If there is, I’d like to know the scenario. The struggles of our bitter rivals have certainly been well documented over the past few days as they endure their worst sequence of results for some 22 years.

Victory for United at Anfield on Sunday would signify Liverpool’s fifth straight defeat and would open up the gap between the two sides to 10 points in the Premier League.  Furthermore, despite the recent vote of confidence, a negative result for the Merseysiders could quite plausibly call a halt to Rafael Benitez’s reign at the club.

Talk about significance. Some may say the less said about it the better as Liverpool, and Benitez in particular, have something of an uncanny knack of escaping even the stickiest of situations.

Sir Alex couldn’t have played it any better in midweek as a potentially tricky trip to Moscow was made decidedly easy as that disciplined 4-5-1 system we have become accustomed to seeing for away fixtures in Europe once again prevailed.  Giggs, Rooney and Fletcher were even afforded the evening off and everything, more or less, went according to plan.

The big team news from a United perspective is centred around Wayne Rooney. We were led to believe he would be fighting fit for Anfield on Sunday although Ferguson has now revealed that he is facing an uphill struggle to make it.

Edwin van der Sar will undoubtedly continue in goal with a back four of John O’Shea, Rio Ferdinand, Nemanja Vidic and Patrice Evra in front of him. Darren Fletcher remains a doubt so the midfield could shape up with Antonio Valencia and Nani on either flank and Ryan Giggs and Michael Carrick forming a partnership in the middle.

Beach balls may be banned from entering Anfield on Sunday but Michael Owen certainly isn’t and, depending on Rooney’s fitness, he could be set for a key role against his former employers. Dimitar Berbatov should definitely start and an Owen goal? Well you couldn’t even begin to script it, could you?

In his Friday press conference, Ferguson discussed his belief that form goes out of the window in games like these.

“Manchester United and Liverpool games, as I have said many times, are without question massive games. That will never change,” the United boss said.

“We are going in in decent form, there is good confidence in our play, but it is a derby game and anything can happen in derby games.

“Going to Anfield at any time is a hard game.”

Despite the history between Ferguson and Benitez, the Scot was quick to point out that he would rather focus on United rather than the predicament currently being faced by his opposite number.

“I’m only concerned about what we do on Sunday.”

Benitez, meanwhile, has hinted that victory against United could “change everything” in terms of his precarious situation at Liverpool.

“I am really relaxed in terms on my position because I know how we are working on the pitch every day” the former Valencia manager said.

“I’m sure that once we win the first game, everything will change.

“This game against United could be the right opportunity for us because it’s a massive game against our rivals and the fans will be behind the team from the first minute until the last. We can change everything.”

So this is it. A huge game for us and surely a defining game for Liverpool and Benitez’s tenure. It would be foolish to completely write off Carragher and co although the severity of a backlash will surely hinge on the wellbeing of Gerrard and Torres.

Having stretched our unbeaten run to 11 games on the spin following victory in Moscow in midweek, confidence should be sky-high within the United camp. A win on Sunday will surely send Liverpool’s title aspirations up in smoke, indeed if their hopes haven’t disintegrated already.

Edit: Some further reading on Rafa, ahead of the ‘pool match.