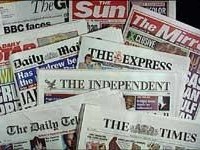 Despite the fact that England’s first game at Euro 2012 is only five days away, the back pages have little time for line-ups and strategies as they continue to focus on the week’s big story – Rio Ferdinand’s omission from the England squad.

Robbie Fowler might not be much loved around Old Trafford but, through the pages of the Guardian, claims that John Terry is the only reason for Ferdinand exclusion which had nothing to do with the “football reasons” cited by Roy Hodgson, who by now must be wondering what he’s let himself into.

The Guardian and the Sun both report that an activist anti-racism group has demanded an explanation as the Kick It Out campaigners (who are partly funded by the FA) have accused the England manager of “messing it up”, while, through the pages of the Mirror, Danny Welbeck thanks Sir Alex Ferguson for lifting his spirit.

The England striker was victim of a terrible challenge by Nigel de Jong in the derby at Eastlands and thought he would miss the tournament through injury, but Fergie proved to be a strong psychological support and Welbeck has now fought his way back into the team.

Away from the circus that is the England team, the news of the day as far Manchester United fans are concerned is the signing of 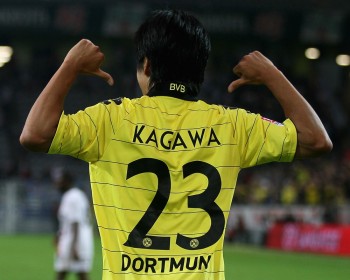 The Japanese international is introduced by the main newspapers, albeit in different ways. While the Guardian focuses on the player and the fee United will have to fork out for him (which could rise up to £17 million), the Sun and the Mirror both report that the former Dortmund playmaker hasn’t been signed purely to sell shirts in the far East.

United’s commercial director Richard Arnold told the Sun that: “We don’t sign players to sell shirts. We are reliant on 25 players and they are all massive stars,” while on the Mirror Bundesliga expert Ross Dunbar dismisses Kagawa as a mere money-making machine as “his dynamism, drive and skill will add just as much to United’s midfield as his shirt sales will to their balance sheet.”

Eurosport UK‘s blog Early Doors offers its views on the transfer, dismissing claims of Kagawa a “consolation prize” and instead pointing out that the Japanese playmaker is a back-to-back title winner in Germany and deserves some respect.

In other transfer news, both the Guardian and the Daily Mail report that United’s target Leighton Baines might be on Napoli’s radar.

However, the Everton fullback is valued at £20 million which is likely to put Napoli, and perhaps even United, off.

They think it’s all over. It will be tomorrow, one way or the other
United chase Modric, sign “special talent”