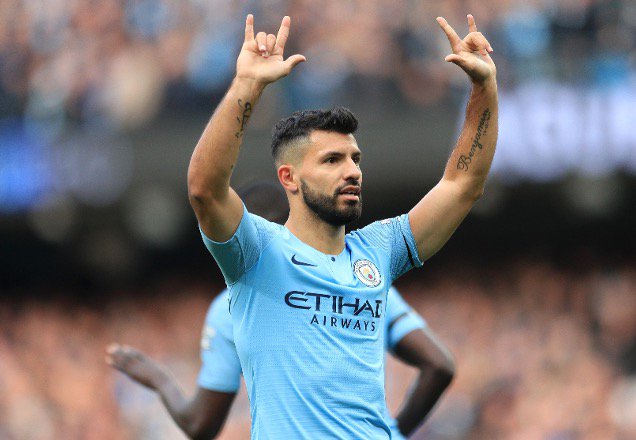 Manchester City are set to host Manchester United in under three hours’ time in the first derby of the season.

The Citizens are set to drop to second before kick off with Liverpool currently beating Fulham at Anfield, and would drop to third should Chelsea beat Everton at Stamford Bridge before we kick off.

We head into the match nine points before our rivals needing a win to get back into the title race and keep in touch with the top four. Both sides were in action in the Champions League midweek – we were 2-1 winners at Juventus whilst City thrashed Shakhtar Donetsk 6-0.

“I admire him because of his fantastic qualities. There are little things in his game that I am not a big fan of, but the numbers speak by themselves. The number of goals he scores.

Sergio Aguero has scored 150 goals in 217 Premier League appearances for Manchester City since joining in a £38 million deal from Atletico Madrid in 2011.

The Argentine has scored eight goals in nine previous appearances against us and will no doubt be their focal point later this afternoon. Pep Guardiola’s side have won nine of their 11 Premier League games this season, drawing the other two.

We were 3-2 winners in this fixture back in April, delaying City’s title confirmation as we came from two down with help of a brace from Paul Pogba.