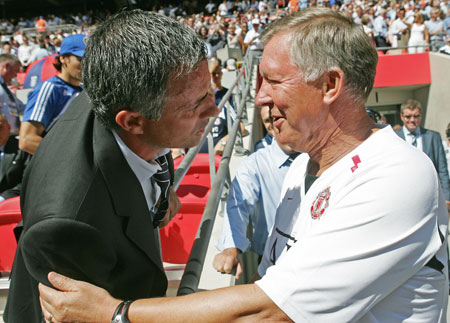 OK so it’s hardly the best kept secret in European football but Jose Mourinho has admitted that he fancies a crack at succeeding Sir Alex at United. At 67-years-old, Ferguson clearly doesn’t have too many more years of management left in him, but does the former Chelsea boss really tick all the right boxes? I honestly don’t think he’s a bad shout you know.

“I would consider going to Manchester United but United have to consider if they want me to succeed Sir Alex Ferguson,” Mourinho told the Daily Mirror.

Now I know many of us have our reservations about the Portuguese and his management methods but there’s no arguing with his credentials. First things first, taking over from the most successful manager in the club’s history will prove to be the tallest of tall orders for the eventual chosen one. Just imagine the pressure! Well while Mourinho is undoubtedly as arrogant as they come, that is arguably the principal trait that Ferguson’s successor will need. A manager that doesn’t wholeheartedly believe they have what it takes to match the Scot’s achievements at Old Trafford is probably destined for failure. Jose Mourinho would claim he could surpass Sir Alex’s accomplishments and it’s that sort of egotism that could handle the whirlwind of inevitable pressure.

There have only been three other managers that have tasted Premier League glory during Fergie’s legacy. Kenny Dalglish with Blackburn in 1995, Arsene Wenger in 1998, 2002 and 2004 and Jose Mourinho most recently in 2005 and 2006. My point is that Mourinho has been there and done it in England’s top flight and he knows what sort of ingredients are required to deliver a Premier League title. The likes of Martin O’Neill, Steve Bruce and David Moyes haven’t, which is one of the reasons why I would put the charismatic Portuguese at the front of the queue.

A UEFA Cup and Champions League success with Porto and also a Serie A title with Inter Milan in his first season in Italy only add to Mourinho’s already impressive CV. His record in the transfer market isn’t half bad either with the signings of the likes Michael Essien, Didier Drogba, Arjen Robben and Florent Malouda. OK so there have been some pretty terrible acquisitions too but not even Ferguson gets it right every time (Taibi, Djemba-Djemba and Kleberson all spring to mind).

I know many of you will call Mournho’s tactics into question arguing that he would abandon the free-flowing, attacking football we have become accustomed to seeing at the club. Well I’m confident that he would adapt his management style, accommodating the player’s he has at his disposal and I really don’t see a great deal of change in that department. Mourinho isn’t stupid. He will know the likes of Nani and Wayne Rooney are at their best when they are given the freedom to go and express themselves. I’m sure he’d be capable of finding a suitable balance anyway.

The main worry I have for Mourinho would be that he would have to hit the ground running. Every Manchester United fan with half a brain trusts Sir Alex in whatever he does where every decision is supported as we know that he will always have the best interests of the club at heart. Like Wenger at Arsenal, Fergie is part of that rare ‘job for life’ breed and when he does eventually call it a day, the whole mentality of the fans will change. Even the slightest whiff of failure or ill judgement and the majority of supporters will turn against Mourinho. Jose, you’ve been warned.

So there you have it. I’m happy to throw my cards on the table and admit that I would be cautiously optimistic if Jose Mourinho was installed as the next United boss. With the biggest job in football comes even bigger responsibility so do you feel that the 46-year-old is capable of becoming the extra ‘Special One’ at United? I guess that’s a question for David Gill to answer.

United gravy train chugs back after Asian jaunt
No Ronaldo? No Problem For United!