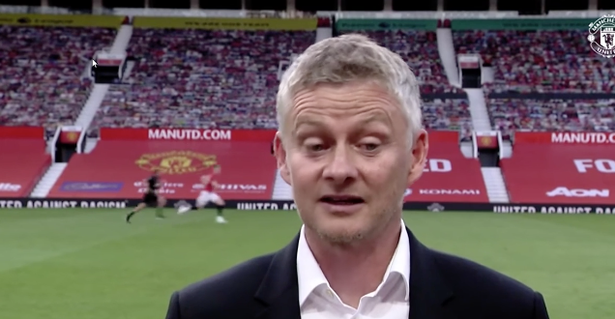 Manchester United failed to produce a good performance at Old Trafford in the Carabao Cup semi-final, and were deservedly beaten 2-0 at the hands of their arch-rivals Manchester City.

John Stones and Fernandinho both got on the score-sheet to get the Cityzens to the final where they will now clash with Tottenham Hotspur at Wembley Stadium in April.

With this latest defeat, United have now suffered a fourth semi-final defeat to get knocked out of this competition. The Red Devils were also beaten in the semi-finals of the Europa League (against Sevilla) and FA Cup (Chelsea) last season.

However, the Norwegian boss has dismissed the notion that the Manchester side’s semi-final issue is psychological, and insisted that they were beaten by a very good team.

“We played against a very good Man City team, definitely,” he said about the Citizens (as per MEN). “They played well. And when they play well, you have to play very well to beat them, that’s just the reality of where we’re at. We’re just lacking that little bit.

“I think when you lose a semi-final and when you lose against an opponent, you think they deserved it. But we’re getting closer. This is a much better version of Man United than a year ago, in those semis. So that’s positive but it’s not enough. It’s not psychological.

“We wanted a final to look forward to as it would give us an extra boost. But it’s not to happen, then you’ve got to dust this off, use the night to get the disappointment away and then we’ve got big league games [against] Burnley, Liverpool. And within a month suddenly Europa League is here again. There’s loads of things to play for.”

Now that they have been knocked out of the Carabao Cup once again, Solskjaer’s side will concentrate their energy on the Premier League, where they are currently level on points with Liverpool.