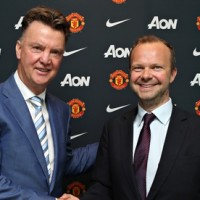 In the late 1970s, throughout the “Darkness on The Edge of Town tour”, Bruce Springsteen used to add a verse to one of his signature songs, Backstreets, in which the song’s main character bemoaned being betrayed by the girl he loved.

“You lied,” sang Springsteen, initially in a melancholic, matter of fact voice, before following the music’s crescendo to utter those words in a mixture of ferocious anger and disgust.

Ed Woodward is nobody’s idea of a lost love but, bar major surprises, United fans could soon be uttering those words soon as, for the second consecutive summer, the club’s executive vice-chairman looks unlikely to deliver on the promises he made before the transfer window opened when he trotted out the now sadly familiar line about United having no budget.

Luke Shaw and Ander Herrera are fine signings, of course, but with just over a week left until the start of the season, it’s hard to argue against the fact that the summer has been, well, a bit of an underwhelming in terms of transfers. The arrival of Shaw and Herrera in June could have and should have been the catalyst for the overhaul the current squad has needed for a few years, but the momentum soon vanished as United were linked with every man and his dog.

Arturo Vidal, Angel Di Maria, Mats Hummels, Juan Cuadrado. One could put together a rather formidable XI with the players United have allegedly looked at this summer but, as things stand, Herrera and Shaw are the only two names in the arrivals column.

A day before the opening game of the season, United have only three centre-backs in their ranks which, considering that Van Gaal intends to play with three defenders at the back, is a case of cutting it almighty fine and while Herrera has shown indications of being an excellent player and Darren Fletcher looks to be back to full fitness, United’s midfield will hardly set the world on fire.

Van Gaal has openly declared the squad is unbalanced, courtesy of years in which United allowed themselves to carry passengers before conjuring to take disaster up a notch by appointing David Moyes last summer, and while the Dutchman is a wonderful manager, one can’t expect miracles from him.

He might well have dragged a largely unfancied Holland side to third spot at the World Cup, but negotiating seven games and coming to terms with the roller-coaster that is a 38-match league campaign are different entities altogether and United ought to have done more to help their new manager this summer.

Moyes and Woodward last summer served up a failure of epic proportions and trying to identify who suffered more from the other’s mistakes is a tedious argument. However, if United’s struggle last summer were down to Moyes’ limited calibre, then why have the same problems resurfaced again, albeit not as vigorously, now that the club has hired one of the best managers in the world?

Last month, during one of those ego-inflating speeches he so dearly loves, Woodward boasted that United were capable of competing financially with every club in the world and that they could even break the world’s transfer record, if they felt they needed to. That statement must have undoubtedly sent the club’s commercial partners scattered to the four corners of the globe in ecstasy but, until followed by facts, Woodward’s words are just that: words.

Van Gaal might not be a manager keen to splash cash just for the sake of doing so but it seems rather odd that none of his targets has so far joined the club, despite the Dutchman’s admission that United to buy and sell. Is no one interested in joining the self-proclaimed best club in the world – a tag which, frankly, gets more and more embarrassing each time it’s trotted out by one of the club’s suits – is Woodward really as inept as we suspected last season or, dare we say it, is the club dragging its heel over financial details?

The latter option is one the Glazers apologists would dismiss a paranoia, but United aren’t in a position where they can dictate the rules in the transfer window and while spending money for the sake of it is best avoided, quality generally demands a higher price than mediocrity.

United have tolerated mediocrity for far too long and if the club is serious about ensuring last season was only a blip rather than the beginning of a new era, then Woodward must walk the walk instead of  just talking the talk. Three weeks can be a incredibly long or dramatically short period of time in the transfer window and United need the next 14 days to bear fruits off the pitch.

None of us wants experience what we did on transfer deadline day last season or, even worse, to shout “You lied!” towards Ed come September 1st.