Is this the best ever headed United goal? 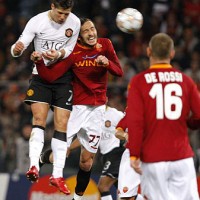 After polling our rapidly growing and ever faithful Twitter following, @Red_Rants has compiled a Top 5 headed goals list.

The list has no headers from pre 1993 so I’m sure many of the older reds will think someone’s having a giggle, but the list, I’m sure you’ll agree, consists of 5 superb headers all provoking some quality memories.

Sit back and enjoy the RedRants Top 5 Headers clips:

5. In 1995 Manchester United had possibly their most iconic player in recent history, a talisman, a poetic Frenchman going by the name of Eric Cantona. On the 22nd January Eric produced the highlight of a pulsating match between then high-flying Blackburn Rovers (who went on to win the league title by a point) United at Old Trafford. Eric won the game in the 80th minute with the only goal of the game with this magnificent header from an almost impossible angle. (forward to 0:58secs)

4. January 2011, The Britannia Stadium, Stoke-on-Trent, England. A little Mexican created his own little piece of folklore history when he quite literally back-headed a goal in the 27th minute to give United a priceless lead at a difficult venue. United went on to win the game 2-1 after a Dean Whitehead equaliser had been overcome with a Nani winner in the second half, but the talk after the game was nothing to do with the win, it was all about that header. See it in all its wonderful glory below.

3. Cast your mind back to April 1993. John Sheridan has put Sheffield Wednesday into a lead that United are struggling to overturn. In the 86th minute Steve Bruce heads in an equaliser but a draw was still not going to be enough if United wanted to avoid any slip-ups like the season before……..step forward Steve Bruce……

2. We all know what happened in 1999, what we sometimes forget is just how much United rode their luck in every competition. On April 21st United went to The Stadio Delle Alpi having only managed a draw at Old Trafford in the first leg of the Champions League semi-final. 2-0 down “in no time” and United were stacing elimination in the face. Roy Keane’s silly yellow card for a nothing foul on Zidane was not only soft but also cost him his place in the final if United were to get there. However, Keane then gave United a lifeline before half-time with this well timed, determined header at the near post…..and the rest is history.

1. The Champions League quarter final in 2008 saw us drawn against Roma, the trip was marred by some over zealous policing with many reds coming back with tales of police brutality and TV images backing up their stories. On the pitch United made short work of their Italian opponents with Ronaldo instrumental in everything United did well. When Paul Scholes clipped in a cross from the right there seemed no reason to float it in, that was, until Ronaldo burst into the box to rise highest and bullet his header powerfully into the ground and into the net to give United a one goal lead….for many of our @Red_Rants followers this goal ranks the highest.

What other headers do you remember that you think should be in a list of great United headers down the years?

Personally I think Nicky Butt’s unlucky not to have his FA Cup Final header in there, so too Ryan Giggs curled header at Highfield Road v Coventry in 1997.

However, a list of Manchester United headers is in no way credible or complete without a mention for the best headerer of the ball I’ve ever seen, his name? Frank Stapleton. One of the most underrated strikers in United’s glorious history for me, sit back and watch as Frank shows you exactly what I’m talking about…..especially his unbelievable effort at Anfield (starts around 2:36 secs).

Is Fergie in for a £100m Summer spending spree?
Destination Kiev – A Travellers Guide