Is Suarez obsessed with United? 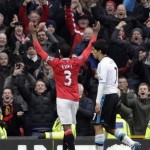 According to The People and the The Daily Mail, the Uruguayan striker – a former Ajax player – has accepted a ticket from a friend and will be in the stands watching his former team in three days time.

The news, if true, beggars belief. Can the man just stay away from any controversy?The answer, it seems, it’s no.

Following his eight-match ban for racially abusing Patrice Evra, Suarez returned to Old Trafford earlier this month causing yet more troubles by refusing to shake Evra’s hand prior to kick off before petulantly kicking the ball in the stands as the half time whistle went.

The Uruguayan’s behaviour brought Ferguson to label him “a disgrace” while Dalglish – at his bitter and senile best – defended his player.

Suarez and Dalglish have both apolgised since the incident, after being put under pressure by Liverpool’s board and by the FA and it’ll be interesting to see the position Liverpool Football Club will take on the issue.

You’d imagine that his club will advise him to watch the game on TV, as it’ll be pointless and irresponsible to reignite a fire that took so long to extinguish – if it has been extinguished at all.

Suarez, obviously, is a free man so, technically, nobody can impede him to watch his former club against United. But here lies the problem as far as Liverpool are concerned. 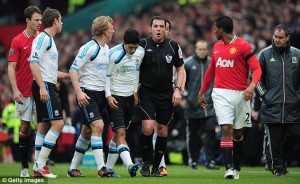 Should Suarez go on his own, without officially representing his club, it would mean that he will be treated like any other fans going into to the game and that – God forbid – should something happen, Liverpool would have no jurisdiction on the matter whatsoever.

One day, far away in the future, we’ll know what exactly goes through Luis Suarez’s mind.

I, for one, understand him. Watching Ajax is as close as he’ll get to European football this season.

“Don’t go out unless you’re red and white, I see there’s trouble on the way” has never sounded more appropriate.