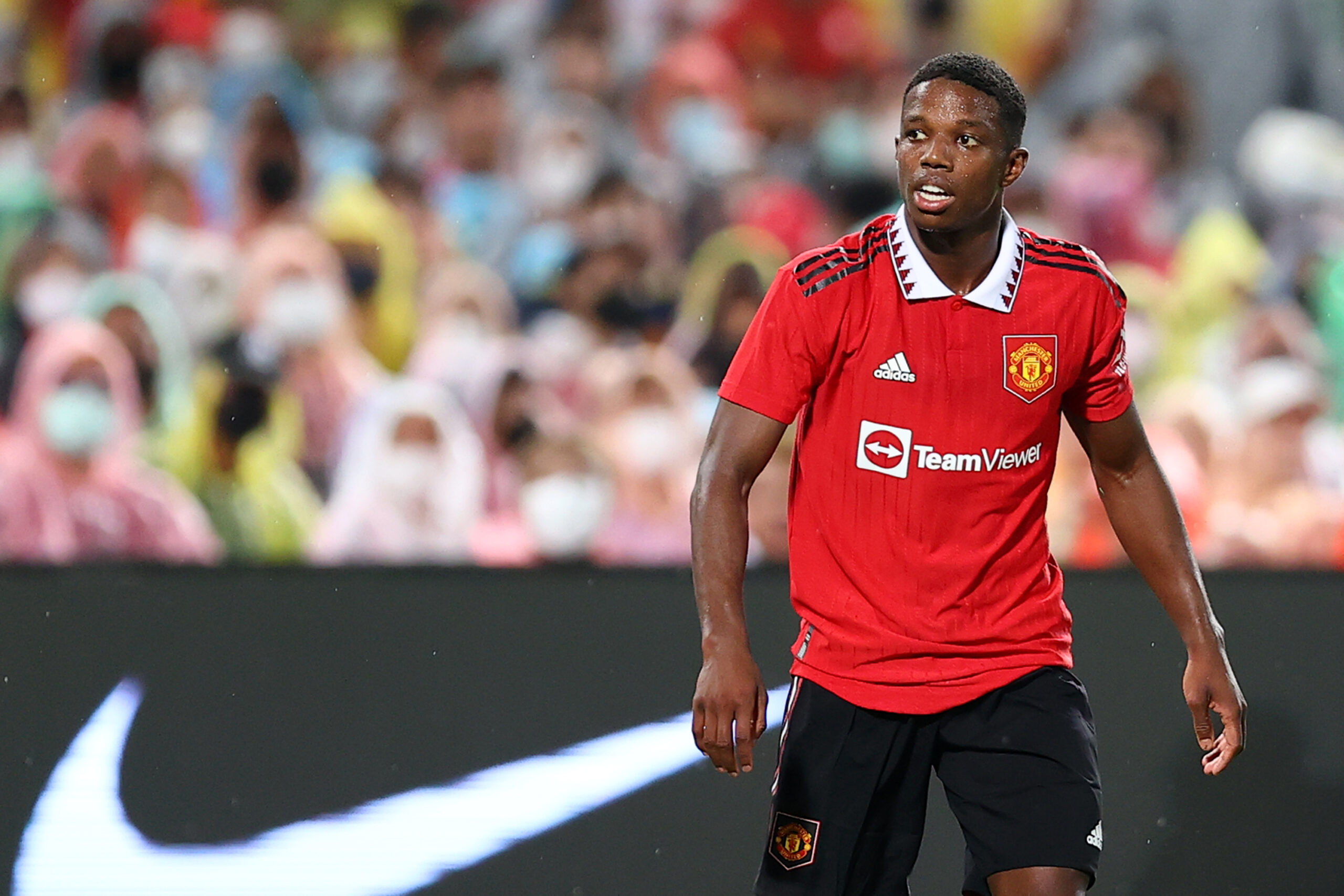 Manchester United are less than two weeks away from their Premier League curtain-raiser against Brighton & Hove Albion, and manager Erik ten Hag should have a fair idea on his starting line-up already.

Tyrell Malacia became United’s first signing of the Ten Hag era earlier this month as he arrived from Feyenoord for €15 million up front.

The Netherlands international was involved throughout the pre-season tour, and should be in line to start against Brighton on August 7.

Alongside him, Christian Eriksen (free transfer) and Lisandro Martinez (€57.37m from Ajax) were signed. They are due to join training this week.

Let’s have a look how Man Utd could line up versus Brighton with their current signings.

David de Gea started off brightly under Ten Hag, but has looked vulnerable over recent friendlies. Against Aston Villa, he was far from his best. He was easily rounded by Leon Bailey in one instance, but his blushes were saved by a Harry Maguire block.

Right at the end, De Gea was caught ducking when Calum Chambers rose highest for Villa to bag an unlikely equaliser. High claims and sweeping actions are not among his strengths, but the Spaniard should get the vote of confidence for the season opener.

Diogo Dalot has been a bright spark from the right-back position for United during pre-season. He recently came up with a splendid left-footed assist for Antony Martial’s goal. The Portuguese has firmly established himself as the regular over Aaron Wan-Bissaka, who could be sold soon.

At the heart of the defence, Harry Maguire appears to have cemented his place after a relatively good pre-season. Ten Hag has also offered a big hint over his prospects of starting next term by confirming that he will continue as the club captain.

However, the England star may need to adapt to the right-sided central defensive role over the coming weeks. Martinez has yet to feature in United training, but we anticipate the left-footed centre-back to make his club debut from the starting XI in front of the home fans.

Ten Hag could revert to one of Raphael Varane, Victor Lindelof or Eric Bailly instead of Martinez, but the 52-year-old may place his trust in the Argentine, who should be well versed with his tactical set-up, having worked together at Ajax over the past three seasons.

At left-back, Malacia probably gets the nod over Luke Shaw after a more solid pre-season tour. Shaw recently produced an assist against Aston Villa, but his defensive work was unconvincing. Malacia, on the other hand, provided the right balance in attack and defence. He has the pace and a strong tackle to prevent counter-attacks.

Ten Hag recently praised Fred for being the ‘connector‘ in the team, and said that the Brazilian can get even better. With United’s pursuit of Frenkie de Jong going nowhere at the moment, it seems quite clear that the Brazil international will line up in the number six role.

Scott McTominay has been fluent with his distribution during pre-season, but Ten Hag may want more creativity from the centre of the park. Donny van de Beek got his chance to impress against Villa, but looked out of sorts. He has not done himself any favours.

Hence, we anticipate Eriksen to line up alongside Fred on August 7. The Dane has been an attacking midfielder for most of his career, but at Brentford, he operated as the deep lying playmaker in the number eight role. He should fare similarly at United.

Ten Hag does not have any selection headache on his hands over the front four. Anthony Martial has been in stunning form up front with three goals in four friendly games. He is expected to lead the line against Brighton regardless of Cristiano Ronaldo returning to training this week.

Behind him, Marcus Rashford and Jadon Sancho appear back to their best after disappointing 2021/22 seasons. Sancho has looked more livelier on the right flank, but Rashford has equally impressed with his movement and link-up play in the final third. The duo are on course to start.

Bruno Fernandes should continue to start in the number 10 role. Van de Beek caught the eye against Crystal Palace with an assist, but may need to work harder to break into the XI, given Fernandes’ consistency over recent years. The Portuguese still needs to work on his distribution, having needlessly squandered possession before Villa’s first goal on Saturday.

How Man Utd could line up vs Brighton