Hit the Glazers where it hurts 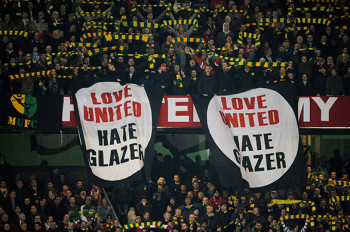 Ed Woodward had yet another busy summer this year, he left the tour early again. Last year the reasons were “Urgent transfer business”. I won’t dwell too much on last summer’s debacle as that was his first year in the job and I will give him the benefit of the doubt but now that he’s fully settled in I want to talk about this summer.

This year the reasons for leaving the tour early for “General business reasons”. Whilst he has been bringing in all these sponsorship deals such as Adidas and Nissin Foods Groups, I believe he seems to care more about revenue and the commercial aspect of the club rather than benefiting the team and sorting out the problems on the pitch by bringing in top class players. To put it simply, I don’t care that iPads are banned from the stadium nor do I see how this has any benefit to the team, he cares more about protecting the brand that is Manchester United Football Club.

I touched on the sponsors that he’s bringing in, like Adidas becoming our new kit manufacture at the start of the 2015/2016 season. Per year we will receive £75,000,000 from Adidas, for ten years. That is all well and good, we are bringing in a staggering amount of money, but we all know that the money we will receive will not go back to the fans.

A few fans on Twitter have been saying that we should boycott the games and have a mass exodus at the ground for our cries to be noticed. I for one do not agree with that as I think that the 90 minutes should be exclusively for the team, the players need our support every week they do not deserve the fans to walk out on them because of the problems upstairs.

As ‘#GlazersOut’ was trending on Twitter, we know the club will have noticed, they will have noticed all the green and gold scarves in the stands every week too but ultimately will they really care about a Twitter campaign or a couple of scarves? We know the money generated does not go back to the fans so why should we let our money (excluding tickets sales) go to them in the first place? Go to the games, sing for the players but at half time do not buy a drink or a snack, before the game do not buy a programme. When the club check the match day revenue they will notice something is not quite right, they will notice our anger and it will affect them more than if we were to wear a green and gold scarf, and as we know the Glazers love to pocket our money, if they’re not getting enough of it, they should act upon it and thus, should give something back to us for a change.

Let’s hit them where it hurts.