Herrera wants away draw for United 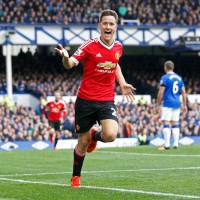 Ander Herrera has echoed the thoughts of most United fans by admitting he would prefer United to be drawn away in cup competitions.

Louis Van Gaal’s side welcome Sheffield United in the third round of the FA Cup this afternoon but the Spaniard, who has previously spoken of his admiration for United’s travelling support, said he would like United to play away from home if they beat the League One side.

“In this competition, maybe I prefer to play away because when you visit lower-league teams, like we did last season, the atmosphere in their stadiums is incredible,” he said.

“I know we are lucky because we are playing at home in front of our fans this weekend, and I always love to play at Old Trafford.

“But if we beat Sheffield United, I’m hoping we get an away draw because I really enjoy those trips. It’s a very enjoyable competition and a nice one that we can hopefully win this season.”