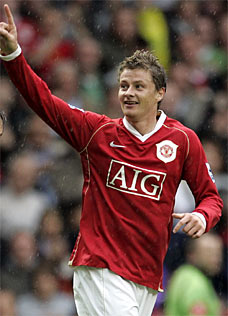 (Note: This is Part Two of the two part tribute to Ole Gunnar Solskjaer. Yours truly, here, couldn’t really be satisfied with what he’s written to do complete justice to the man, so he felt it was better to use a contrasting example of another departed ex-Red to fully highlight the true importance of players like Ole. Part One, which was a video & images tribute, can be read here.)

No one could fathom that a player who was signed from a little known club, which went by the name of Molde, instead of another future legend (albeit for another club, Newcastle) would go on to become a legend himself. No one quite expected a player to make such a name for himself by just coming off the bench. No one could quite imagine a player to be so influential off and on the pitch and yet slip under the radar for most part. It was certainly in keeping with everything that Solskjaer stood for. The player, who, of course, despite the numerous contributions made by him for the United cause would be forever remembered for that day.

But let us not make it about that day. This is more than that moment of destiny. That moment was significant, no doubt. But others have also had such that moments.

David Trezeguet had that for France in Euro 2000. Oliver Bierhoff had that for Germany in Euro 96. Jerzy Dudek had that for the Dippers on that night in Istanbul. But all have since then been reduced to mere showpiece moments on DVDs or suchlike.

Ole, however, was special, not just for that moment. A legendary performance can quite quickly and easily get to a person’s head. Heinze’s agent demanded wages for his client in excess of 100,000 a week on the back of one good debut season. Solskjaer, attracted the interest of Tottenham the season after the Champions’ League. He could have just retired and he’d have been a legend. SAF left the option to Ole if he wanted a move. He stayed.

In a world increasingly besieged by player egos and mercenaries, Solskjaer was a symbol of humility, selflessness and model professionalism. His selflessness was definitely highlighted by the crucial goal he ‘saved’ by seeing red for the team with a last ditch tackle on Rob Lee, the video of which is below to see.

(For those who need background, this was a game – in the 1997/98 season – where United were in danger of losing ground in the title race. They were drawing 1-1 to Newcastle when Rob Lee broke on the counter. Someone had to make a tackle and take the hit. Arsenal eventually won the title, but the effort from Ole became a part of folklore.)

Plenty of other moments, especially his last ditch goals coming off the bench, were there for us to see. When Fergie was once asked who would be manager material out of his side, when many people were expecting him to say ‘Roy Keane’, SAF chose, instead, to mention the Norwegian’s name. The reason he was so successful as a sub was because of his observation of the game from the bench. SAF had also said in the past that when he sent Solskjaer on, there usually weren’t any specific tactical instructions given to him. Such was his trust in Ole’s ability to read a game.

Even last season, which was another one of his injury blighted years, he showed his ability to read the game so well that those who see him scoring off those tap-ins seemed to forget how far his awareness and understanding of the game went into getting in those positions in the first place.

In the age of player petulance and increased wage demands it is worth contrasting Ole’s situation with that of Heinze.

Both are from outside England and have been victims of horrific injuries. Both were heroes for the fans in their own rights. The club and fans stood by both players through their respective ordeals. Heinze’s reaction was to demand a move/ask for a ridiculous pay rise/get treatment in a place of his choice/take the fans’ wishes and hopes for granted.

Ole on the other hand acknowledged the praise. He not only said how proud he felt with the support from the fans (things which are not entirely new from a player) but did more. He did this:

The Norwegian football professional playing for Manchester United, Ole Gunnar SolskjÃ¦r, has donated all proceeds from his sponsorship with NIKE to UNICEF Norway, and will continue to do so as long as he is injured. In addition, he has donated 300.000 NOK (approximately $ 45,000) which he earned from a goat cheese advertising campaign in Norway. His contributions will be used to build a school in Eritrea.[Link to UNICEF site]

While it is fair enough for people to say that he is not exactly going to struggle to make ends meet after those donations, it does speak volumes about his character. His injury and non contribution to the team in a playing capacity because of his injury made him feel that he owed the fans. He possibly felt he wasn’t fit to be earning his money by sitting in the physio room. Some players are good when it comes to making goodwill speeches, but usually fail to walk the talk.

Ole Gunnar Solskjaer, to us, is more than a footballer. He is an ideal. Someone who gives us hope, and even reminds us of the simple joys of the game – joys that made football known as the Beautiful Game. And it’s not just football. Sports, in general, would be the richer if it had more Ole’s.

Characters like him are, to borrow a cliche, a dime in a dozen. It is therefore impossible for one to actually write a tribute without a feeling of being a little inadequate oneself. I feel a lesser person already after having watched his clips and sound bytes over the past couple of days.

So without embarrassing myself anymore, here is to a legend we have had the privilege to watch before us.

Thank you Ole. Thanks for the memories.

We end the post with the MUTV interview he gave just following his retirement. He had a tough time fighting off the tears. And notice how much emphasis he puts on the fans, Sir Alex and loyalty. Legendary stuff, takes you back by many years.

To The (20)Legend, The Departed: Part I
Ronaldo Scores, Players Come Through Unscathed… So Far