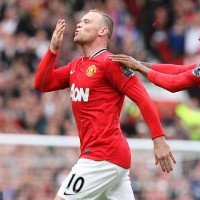 We had left at Wembley on a balmy night in May, humbled and outclassed by Barcelona’s spider-web of exquisite passes and touches, we reunited with them at the same venue barely more than two months later, on a sunny August afternoon for the most unfriendly of Community Shields against bitter rivals Manchester City.

United, on the back of a summer where rumours had chased and overtaken each other in a frenzy of “ifs” and “buts” unveiled their three new signings – former Villa man Ashley Young and the exciting young duo of Phil Jones and David DeGea purchased from Blackburn and Atletico Madrid – against a City side that had just been bolstered with yet more players recruited around the world in Sheik Mansour’s latest spending spree.

With both teams widely tipped by the bookmakers to challenge for the title neck to neck (ha… if only they knew) the traditional curtain raiser was seen as a tasty appetizer ahead of the full menu of a Premier League season – and it lived up to expectations.

City were 2-0 up at halftime courtesy of goals from Joleon Lescott and Edin Dzeko in a less than memorable first 45 minutes for DeGea who, as we shall see, was about to become the media’s number one target , as experts across the country were quick to label him as the weak link in United’s back four. 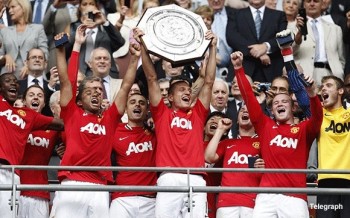 With the introduction of Jones and Cleverley at halftime, United were quickly back on level terms through some wonderful football, as the former Wigan loanee inspired the Reds drawing comparison with former United legend Paul Scholes, before Nani capped the comeback with a brilliant finish seconds away from the final whistle.

Premier League duties were resumed a week later, with United victorious at The Hawtorns following a late own goal. The Reds impressed throughout the first half with Anderson and Cleverley combining like the sort of well-oiled partnership United fans were craving for and Wayne Rooney picking up where he had left in May as he notched the first goal of the campaign.

A week later United made their season debut at Old Trafford dismantling Harry Redknapp’s Spurs in the first Monday night game of the season. Goals from Danny Welbeck, Anderson and Rooney were the perfect tonic to prepare for the visit of the other half of North London, six days away.

With City winning 5-1 at White Hart Lane earlier in the day, United knew they had to deliver a strong message against old foes Arsenal but the magnitude of what unfolded was beyond anybody’s wildest expectations – or nightmares, for Arsenal fans. 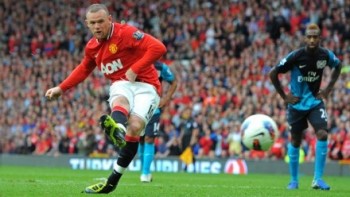 United started the game like men possessed, their mesmeric passing causing all sorts of problems to Arsenal’s paper-thin back four, and were ahead with barely 20 minutes played through Danny Welbeck’s second consecutive goal.

DeGea then took centre stage saving Robin Van Persie’s penalty before Young spread salt on the Gunners’ wounds by doubling the lead less than a minute later. Rooney was on the scoresheet again and despite Walcott’s goal, Arsenal looked beaten as they went into the dressing room 3-1 down.

Rooney added another two in the second half, with Young – scorer of an absolute stunner – Nani and Park joining the scoresheet and forcing Arsenal to refund the tickets to the fans that had taken the trip up north.

Wayne Rooney grabbed a second consecutive hat-trick as United started September with a bang, humbling Bolton 5-0 at Reebok Stadium with Javier Hernandez recording his first two goals of the season. 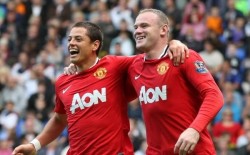 Unfortunately for the Reds, an awful challenge by Kevin Davies forced Tom Cleverley off the pitch and signaled the start of a lengthy spell on the sidelines for the youngster who had been a true force behind United’s blistering start to the campaign.

Cleverley’s fluidity was sorely missed as United got their European campaign off to a stuttering start, drawing 1-1 away at Benfica through a Ryan Giggs’ goal.

With DeGea under intense scrutiny from the media, Sir Alex Ferguson opted to throw Anders Lindegaard in the cauldron of the Estadio da Luz and the Danish didn’t disappoint, pulling off some excellent saves.

Next up it was the third London team to visit Old Trafford in less than a month, as Andre Villas Boas’ Chelsea aimed to deal an early blow to the champions.

Much had been made of Villas Boas’ new approach, but the man too quickly labeled as the “new Mourinho” could only watch as United tore his team to ribbons in a brilliant first half. 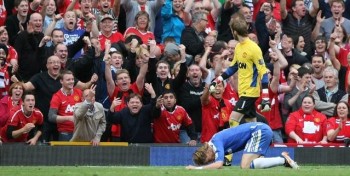 An early Chris Smalling goal, a superb effort from Nani and a by now customary goal from Wayne Rooney had the Reds three up at halftime.

Former Liverpool man Fernando Torres managed to pull one back after the restart before squandering the easiest of chances in front of the Stretford End and prompting a roar louder than the ones that normally welcome a goal.

With United’s young faces at the centre of attention following an excellent start to the season, it was left to the old heads of Owen and Giggs to secure United’s progression in the League Cup.

A professional United side claimed a 3-0 win and silenced the hostile Elland Road crowd, before turning their heads to the Premier League.

United traveled to Stoke leading City by two points but were forced to settle for a 1-1 draw which saw City joining them at the top of the table following their 2-0 win against Everton.

United were looking to put their European campaign back on track at Old Trafford but, unfortunately for them, Europe was again a source of disappointment as United wasted a 2 goals lead against Basel and had to thank Ashley Young for a late equalizer.

A brace from Danny Welbeck – with the goals coming within 60 seconds – had seemingly put United on course before a second half collapse had looked like securing a famous win for Basel.

United got back to winning ways at the beginning of October as goals from Anderson and Welbeck broke down a resilient Norwich side that was beginning to show glimpses of the excellent football that would characterize their season.

The three points were more than welcome as United would face two tough tests in quick succession: a trip to Anfield before hosting City a week later. 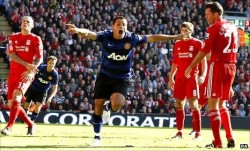 A late Javier Hernandez’s goal cancelled out Steven Gerrard’s opener and secured United a valuable point on Merseyside which meant United would go into the derby trailing their neighbours by two points.

The Anfield game would have repercussions throughout the season as Patrice Evra accused Luis Suarez of racial abuse, opening a less than dignifying page in the history of Liverpool Football Club as Kenny Dalglish wheeled out a catalogue of excuses in a one man crusade against Evra, United and the FA.

A trip to Romanian minnows Otelul Galati preceded the highly awaited derby and United got their European campaign back on track with a 2-0 win courtesy of two penalties from Wayne Rooney.

City’s visit to Old Trafford had been billed has the biggest derby ever and the game sent shockwaves through English football. Despite United enjoying most of the ball, City went back to dressing room 1-0 up through a Mario Balotelli’s goal before the worst day in United’s recent history unfolded in the second half.

First Evans was sent off for a foul on Balotelli who then added a second before Aguero pounced to make it three for the visitors. 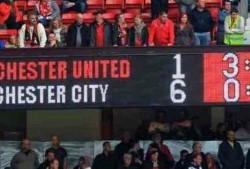 Darren Fletcher momentarily restored some pride, before Silva and Dzeko hit three goals within 2 minutes to make it a day to forget for the red half of Manchester.

United duly disposed of Aldershot Town in the League Cup thanks to goals from Berbatov, Owen and Valencia before Javier Hernandez scored the only goal as the Reds took the first step towards overcoming the derby’s nightmare by winning 1-0 at Goodison Park against a typically stubborn Everton side.

Two home wins against Otelul Galati (2-0) and Sunderland  (1-0) marked the beginning on November, as United fans paid their tribute to Sir Alex Ferguson for his quarter of a century at the club.

The game against Sunderland, falling on the 5th of November and marking Fergie’s 25 years at the helm, saw the inauguration of the Sir Alex Ferguson Stand, previously known as North Stand. 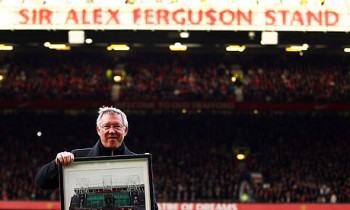 With City showing no sign of slowing down and scoring for fun, United grabbed another three points by the slenderest of margins as Hernandez scored the winner at Swansea before United were left recriminating a series of missed chances as they drew 2-2 at home against Benfica.

A 1-1 draw at home against Newcastle following a terrible decision by the ref to award the Magpies a travesty of a penalty with 20 minutes to go and a shocking 2-1 defeat in extra time against Crystal Palace at home completed a week to forget for United who were now out of the Carling Cup and in danger of being dumped out of Europe and trailed City by five points.

Phil Jones – one of the positives of the early months of the season, displaying great energy and awareness despite being deployed at right back, centre back and even defensive midfielder at times – scored the winner at Villa and was on the scoresheet again three days later as United were knocked out at the group stage for the first time since 2006 after losing 2-1 to Basel, with Nemanja Vidic suffering a knee ligament injury which meant his season was as good as over. 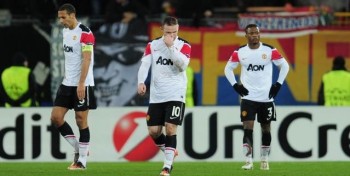 Following the defeat to Basel, media and pundits had a field day. Truth be told, United did not deserve any credit for a European campaign characterised by a catalogue of errors and lack of urgency.

There’s no better tonic than a win to forget a disappointment and United took the doctor’s advice to the letter, by winning four on the trot.

Wolves fell 4-1 at Old Trafford, before United put 2 past QPR and 5 past Fulham in three days in West London (without conceding a single goal) and another 5 past Wigan at Old Trafford on Boxing Day.

An excellent Christmas – following City’s first defeat of the season at Stamford Bridge on the 12th of December, they also drew 0-0 at WBA on Boxing Day – almost turned into a nightmare New Year’s Eve as a reshuffled United fell to a shocking 3-2 defeat at home against struggling Blackburn Rovers.

Fortunately for United, Sunderland’s last minute winner against City meant that both Manchester clubs would start 2012 level on points, as third placed Spurs trailed them by six points.