Fort United is for Real this time 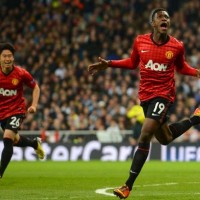 Much had been made of this clash, Ronaldo’s first meeting against his former club, and it did not disappoint, offering everything a European tie should provide. The scene is set for the return leg on the 5th March at Old Trafford which we’re giving away two tickets to courtesy of bwin.

United were pegged back in their own half, their own box even, but withstood the waves of white with a maturity they had lacked in years gone by, and considering the average age of this United side it was no small achievement.

United, wary of their record at the Bernabeu, started with a defensive formation, with Rafael, Ferdinand, Evans and Evra at the back and Phil Jones, Carrick, Kagawa and Rooney in midfield with VanPersie up-front.

With five minutes gone, Ronaldo’s cross was rebuffed by Ferdinand but Coentrao’s shot was deflected onto the post by David De Gea.

As the clock reached 20 minutes United were ahead having sustained a lengthy spell of pressure from Real Madrid.

Rooney’s corner found Welbeck whose brilliant header secured what could prove to be a vital away goal and sent the United end berserk.

Within three minutes Di Maria went close to the equaliser but his shot was brilliantly parried by David De Gea, who had to surrender to Cristiano Ronaldo’s superb header on the half hour mark.

Di Maria’s pinpoint cross found Ronaldo hanging in the air over Patrice Evra, before he buried a header past David De Gea to level the score, an effort reminiscing of his goal in Moscow in the 2008 final.

There were no twists in the plot, as Ronaldo didn’t celebrate as a sign of respect to his former team.

Three minutes later, United should have silenced the Bernabeu crowd yet again but Welbeck’s flick was inches wide and when Rooney found space on the following corner, his shot was a whisker away from the post.

The game was end to end and minutes later Ozil tested De Gea before Ronaldo came within inches from meeting the German’s cross.

Varane should have seen red for bringing down Patrice Evra a minute later, before De Gea produced an outstanding save to deny Coentrao who thought he had put Real in front.

Giggs replaced Kagawa and United’s fight for survival almost turned into a smash and grab effort as Van Persie saw his shot parried onto the bar, before his second bite of the cherry was cleared off the line by Xabi Alonso.

Lopez denied him, but United’s effort rewarded them with a precious draw that increases their chances of progressing to the next round