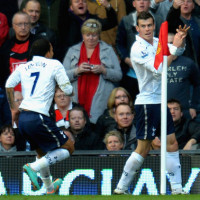 United travel to White Hart Lane on Sunday as the form team in England on a mission to avenge the early season lesson bestowed on them by Spurs and their pace attack.

The two teams have dropped just 9 points between them from a previous possible 48, Spurs dropping 7 of those, United just 2.

White Hart Lane has been a happy stomping ground for United down the years and Betegy give them a 35% chance of taking all three points back to Old Trafford.

But can United deal with the pace that exposed them so alarmingly back in September last year? Have United learnt the lessons of that day?

Spurs ended an unenviable record of zero wins in 23 years by cruising through United’s static midfield to an early two-goal lead to stun the gaffer, players and fans alike.

Despite a valiant effort, another breakaway goal saw Clint Dempsey ease a finish into the net with bags of space and time you rarely see afforded to the opposition at Old Trafford.

Giggs and Scholes started that fixture and Ferguson is yet to make a repeat iof that selection since, and rightly so in the eyes of the majority. Their advancing years and labouring legs were no match for Spurs’ direct style.

Four months on and United you feel are heading towards top gear. Carrick has found consistently high performances, Cleverley, although less consistently, has proved to be a decent partner for Carrick while the defence has tightened itself up since the Boxing Day debacle of Newcastle at home and coinciding with the return of Nemanja Vidic.

United have conceded just once since that fixture in three outings. That goal came against Liverpool last weekend.

Sir Alex went on record to attribute the cleansheet and successful passage through to the next round on the players defensive performance. He said “Jones and Smalling were fantastic, absolutely brilliant. The two of them were absolutely marvellous and I couldn’t be more pleased. They have been injured for a while and needed games, so today would only help them”. Could that suggest one or other of the duo could start on Sunday?

In Ferguson’s press conference this morning he ruled Jonny Evans out of Sunday’s clash as he’s not quite 100% fit after suffering a hamstring injury v West Ham in the 2-2 draw at Upton Park. Other than that Fergie explained “we’re not to bad”.

Will Sir Alex cast his mind back to that defeat in September and remember how Rafael and Ferdinand had somewhat of an abomination along with the not so guilty Jonny Evans?

In fairness, all three of those have, along with the team in general, improved performances since that defeat. But you have to feel Ferdinand especially will be vulnerable on Sunday. After Smalling and Jones shining on Wednesday there could well be a spot there to fill alongside Vidic.

Did Nani do enough on Wednesday to justify inclusion in the starting XI? I’m not sure he did but I have a sneaky feeling he could get the nod ahead of Valencia or Ferguson could just as easily hand Nani a role on the left.

Up front it’s surely a question of who partners Robin van Persie if Sir Alex chooses notto pack midfield. Hernandez was a surprise omission last weekend but played a pivotal role in the cup triumph on Wednesday, he would perhaps have good reason to feel aggrieved were he to miss out again on Sunday considering his recent scoring record. He’s yet to score against Spurs, maybe Sunday will see him break that duck.

Betegy have United down for their ‘Extreme Bet’ where they suggest the outsider will overturn the odds and come away with a positive result. However, the biggest sign of exactly how tight this match appears on paper, is the percentages allocated for each possible outcome. Betegy make a home win 32%, a draw 33% and an away win 35%……are you backing your team on Sunday? 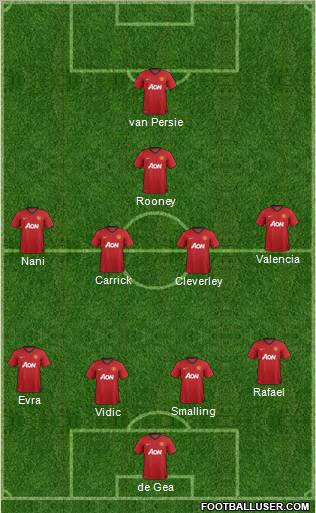 As fruitless as it is predicting the starting XI; here’s how I see it.

We have to counteract their pace, obviously, and we have to exploit the gaps behind their marauding fullbacks in Vertonghen and Walker. Parker will destroy everything in zone 14 in the absence of the more dynamic Sandro so we need to work around that by using the flanks when possible. Anything through the middle could be Carrick over the top to the man with easily the best first touch in England, RvP.

How do you see the game going?
Will Fergie pack the midfield rather than playing 4-4-2?
What’s your team prediction?

I’m going with a United win. We owe them one from September and we’re on a run we appear to be desperate to protect at all cost. For that reason, and the form we’re in, I’m on Spurs 2-4 United in a bit of a winter classic!

Good luck to the masses of Reds making the trip South, I hope the weather’s kind to you and the journey isn’t scuppered by the forecasted blizzards over the UK this weekend.